(CNN) -- The unlikely alchemy of a hard-rock legend and a bluegrass superstar created Grammy gold Sunday night, as Robert Plant and Alison Krauss picked up five awards -- including album and record of the year -- for their work, "Raising Sand." 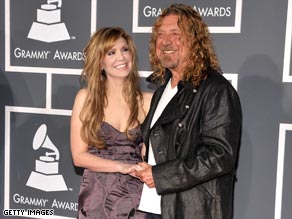 "Sand" won album of the year honor, while a song from the set, "Please Read the Letter," won record of the year.

"I'm bewildered. In the old days we would have called this selling out. But it's a good way to spend a Sunday," said Plant, the legendary Led Zeppelin front man.

"Raising Sand" was produced by T Bone Burnett, whose production and oversight of the "O Brother, Where Art Thou" soundtrack won three awards -- including album of the year -- in 2002.

For "Sand," Burnett selected several songs, mostly obscurities such as Gene Clark's "Polly Come Home" and Sam Phillips' "Sister Rosetta Goes Before Us," and let Plant and Krauss mix it up in stark, often subdued fashion.

The result was widely praised and reached No. 2 on the album charts.

Watch Plant and Krauss talk about their win »

The win adds to Krauss' eye-popping Grammy total of 26 awards -- more than any female artist in history and third only to conductor Sir Georg Solti (31) and producer-arranger-mogul Quincy Jones (27).

The awards were overshadowed by news that performer Chris Brown, who had been up for two Grammys, had become the focus of a domestic-violence allegation. Brown turned himself in to Los Angeles police Sunday evening.

Watch a report on the latest developments in the Brown case »

He was released on $50,000 bail, according to the Los Angeles Police Department.

Authorities said Brown and a woman were involved in an argument in a vehicle. Read more about Brown

The argument escalated when Brown stopped the car and the woman got out, the LAPD said, citing the victim's account.

A representative for Brown at the ICM agency in Los Angeles could not immediately be reached for comment.

Coldplay took home one of the Grammys' big three honors, song of the year, for the title track of their album "Viva La Vida." The group also won best rock album.

"Thank you and sorry to Sir Paul McCartney for blatantly recycling the 'Sgt. Pepper' outfits," the band's Will Champion said, noting the group's colorful attire.

See the stars on the red carpet »

The Grammys are often better remembered for the colorful performances than the winners, and this year's 3½-hour telecast seemed determined to showcase nominees, often in unusual combinations and settings.

Jennifer Hudson brought the house down with an emotional performance of a new ballad, "You Pulled Me Through," and won best R&B album -- an award presented by another big-voiced vocalist, Whitney Houston.

Hudson was equally emotional in her acceptance speech. "I'd like to thank my family in heaven and those who are with me today," she said, her voice catching. "Everybody, thank you all," she concluded.

Watch Carrie Underwood talk about her meeting with Hudson »

Jamie Foxx took a star turn with a quartet of singers -- including Smokey Robinson -- in a medley of Four Tops songs in tribute to the group's late lead singer, Levi Stubbs.

Paul McCartney, backed by powerhouse Dave Grohl on drums, did "I Saw Her Standing There" -- the first track from the Beatles' first album, "Please Please Me," in 1963.

Four famed rappers -- T.I., Kanye West, Jay-Z and Lil Wayne -- were called the "Rap Pack" in a segment that followed a tribute to one of the Rat Pack singers, Dean Martin, who received a lifetime achievement award. With them was M.I.A., extremely pregnant but giving it her all.

Then there was the pairing of Stevie Wonder with the Jonas Brothers in a medley that concluded with Wonder's "Superstition."

Brown and Rihanna, each scheduled to perform, were notable for their absence. Rihanna was scheduled to sing "Live Your Life/Disturbia" and Brown was later to sing "Forever." Apparently substituting for one of the slots was an all-star version of Al Green's "Let's Stay Together," led by the good reverend himself.

With more than 100 categories, only a relative handful were presented on the show. Among the winners not televised on the broadcast -- though available on the Internet -- was best comedy album, which went to the late George Carlin for "It's Bad for Ya." It was his fifth Grammy.

Carlin's daughter, Kelly, accepted on his behalf, saying she'd take better care of it than Carlin did with his first Grammy. That one, she observed, was taken apart in a "chemically induced, altered state."

Carlin was eventually sent a new Grammy for his trouble.