NEW YORK (CNN) -- U2 fans braved the frigid cold serenading each other with old hits as they waited hours for the band to show up Tuesday. They were not disappointed. 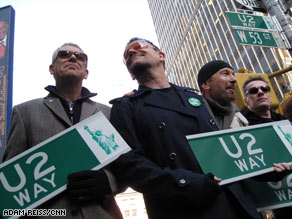 Bono, Adam Clayton, Larry Mullen and The Edge appeared on the southwest corner of 53rd Street and Broadway -- along with Mayor Michael Bloomberg -- to unveil the street sign "U2 Way."

West 53rd Street west of Broadway will keep the name for one week while the band is in town to appear each night on CBS' "The Late Show with David Letterman."

The rock band released its 12th studio album, "No Line on the Horizon," Tuesday and is gearing up for a worldwide tour to begin in July.

Bloomberg told fans that the band represents peace and tolerance, and each member will now be considered an honorary New Yorker -- a status that is a bit more than honorary for Bono and The Edge, each of whom have second homes in the city.

The rechristening of the street had special meaning for the band members.

"The Beatles had Penny Lane, Elvis had Lonely Street and now we have the street between 10th Avenue and funky, funky Broadway," said Bono.

Drummer Larry Mullen cracked that he had been hoping for something better, along the lines of Larry Mullen Circle.

Guitarist The Edge said the band has a long history with New York City -- from the Mudd Club, where the band played in its early days, to Madison Square Garden, where it is expected to play several sold-out shows this summer.

Avoiding traditional rock band stumbles and breakups, U2 is in its fourth decade of music, dating back to the band's formation in 1978, when the four were just a bunch of high school friends hanging out on the streets of Dublin, Ireland.

The band that once sang "Where the Streets Have No Name" now has a street with a name -- its name.