Whatever happened to 'American Idol's' Mandisa?

(CNN) -- Simon Cowell may not recognize "American Idol" alumna Mandisa the next time he sees her. 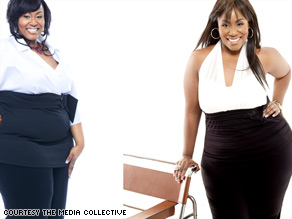 Mandisa, who appeared on season five of "American Idol," has lost more than 75 pounds.

The woman about whom the acerbic "American Idol" judge once said, "We're going to have to get a bigger stage," has lost 75 pounds -- and hopes to lose 100 or more.

Though she has long forgiven Cowell for his snippy comments during season five about her weight, she said she still wants to lose more in part because he is a father figure for her. The last time he saw her was last season when she had lost a few pounds. He raved about how nice she looked then.

"He was very encouraging and saying how proud he was of me," she said. "It's sort of like your dad who you really want to please. I want to please him and to show him that I am doing well."

Mandisa, whose full name is Mandisa Hundley, said that her faith in God has guided her new lifestyle.

"It's more than the physical and more than what I am eating. It's a spiritual change," she said. "I've had to not turn to food for comfort and validation anymore, and that is a complete mind change. Because my entire life, that is what I have done."

She named her new album, "Freedom," due out March 24, after the feeling she has gotten breaking what she calls her food addiction.

It follows a successful debut CD, "True Beauty," of which Entertainment Weekly said, "Plus-size powerhouse Mandisa ... realizes her considerable pipes and self-righteousness are best suited to Christian pop." It sold more than 160,000 copies.

The new album is full of catchy Christian pop tunes such as "My Deliverer," "Dance Dance Dance" and "Freedom Song," and power ballads such as "Not Guilty."

The song that is nearest to her heart is "You Wouldn't Cry," a tune based on a fan whom Mandisa met and corresponded with who lost her unborn child. Mandisa said that when she went to put together a CD of songs to help comfort her friend, she couldn't find anything from the child's point of view.

"I wanted to write a song about what Andrew would say to his mom about the fact that he's in heaven," Mandisa said. "For people who have faced the situation where a loved one had gone to be with the Lord, I think the song will mean a lot to them."

She called "My Deliverer" her personal testimony. In the chorus she sings:

My deliverer, you rescued me from all that held me captive

My deliverer, you set me free

Now I'm alive and I can live

The song as a first single is "perfect, because it's a kind of been my story over these past few months" of her weight loss.

When CNN.com first spoke to Mandisa in January, she was singing on a cruise ship. (Yes, Simon, a cruise ship.) "I think that this is a cruise ship like no other," she said of the K-Love Family and Friends cruise, a gathering of Christian music bands and their fans.

She beamed with pride then as she described her new exercise regimen and diet. The most difficult part has been to retrain her mind to turn to God instead of turning to food, she said. She also talked about her time on the show that brought her to America's attention.

"American Idol's" producers gave the fifth-season contestants a speech about being themselves, saying to not pretend to be anybody other than who you are, she said.

"I don't know that they realized that I was as vocal about my faith as I am," she said.

She was caught in controversy when an article in The Advocate questioned whether she was a proponent of the "ex-gay" movement. She thinks her critics were too focused on her statements about not agreeing with what she calls "the lifestyle" and missed her message of love for everyone.

"I think that we are called to love people that are different from us and that don't agree with the things we agree with," she said.

She still watches "American Idol" faithfully, and like many other people tuning in each week, is a fan of Danny Gokey, a 28-year-old widower from Milwaukee, Wisconsin.

She said this week that he is the clear favorite but also likes 23-year-old Matt Giraud from Kalamazoo, Michigan ("I love his voice") and Lil Rounds, a mother of three from Memphis, Tennessee ("I think she's incredible as well").

"But I am still rooting for Danny to win," she said.

After being booted from "Idol," many observers thought that Mandisa had a good chance of becoming a successful R&B artist. She said she considered that path; it was all she wanted to be when she was growing up. But she felt a call to sing Christian music.

"Christian music is the music that comes the most naturally for me," she said.

The pop world is so big, and it has been easier for "Idol" alums who have pursued careers in country or Christian music, she said.

She said she also is pretty passionate about exercising.

"There's a feeling you get after you exercise; it's just unexplainable," she said. "It makes you know that you have done the right thing for your body."

She works out with a trainer three to five times a week, mixing cardio with muscle-building exercises.

"This is a lifestyle for me. My goal is to be healthy," she said.