New Kids on the Block take fans back

NEW YORK (CNN) -- Twenty years ago, when the New Kids on The Block were wearing their hair almost as high as their fame, the music business was a vastly different animal. There was no "American Idol." No such thing as a download, legal or otherwise. People collected posters, not ringtones. 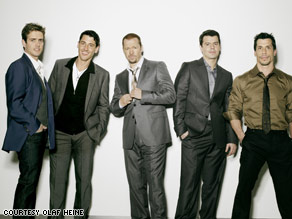 Having wrapped one successful tour, the New Kids on the Block will begin another trek in May.

But it appears something has carried over from that distant era. Something loud, something jumpy, something ready to roar: Blockheads (or to those not familiar with boy band lingo, fans of New Kids on the Block).

As a "look who's laughing now" to those who thought reuniting for a new album and tour was a ridiculous idea, the group's past followers came out in droves last year to see Jordan Knight, Joey McIntyre, Donnie Wahlberg, Jonathan Knight and Danny Wood give some new choreography a whirl at concert venues around the world.

Watch the New Kids up to old tricks »

So cool that the band has announced a whole new set of North American concert dates they're calling the "Full Service" tour. The 34-stop trek kicks off in Atlanta, Georgia, on May 28 and winds up in Houston, Texas, on July 18. Tickets go on sale Friday.

But before the tour, New Kids on the Block will hit the high seas -- along with boatloads of Blockheads -- for a three-day concert cruise in the Bahamas in mid-May.

"The cruise is the one area where we've completely lost our minds," Wahlberg said. "We're going to have to answer to thousands of fans on the boat. It's going to be insane."

But perhaps not as insane as things might've been if this were still the '80s. The band members -- now 40ish, and all but one of them fathers -- concede that they've mellowed considerably, and so has their 30-something female fan base.

"We didn't just go completely bonkers and stop being adults," Wahlberg said of the 2008 tour. "The fans didn't hang out in front of the hotel, singing songs for 20 hours straight. They just got hotel rooms and hung out in the lobby and met us for drinks at the bar."

New Kids on the Block recently hung out with CNN and talked about surprising the skeptics, the boy-band stigma and how the music business has changed in the 15 years since they disbanded. The following is an edited version of the interview.

Joey McIntyre: The music business has changed incredibly. There used to be 50 record companies. Now there's only three, and it's just getting smaller and smaller. But then again, you have the Internet, so anybody who has music can get it out there.

Jordan Knight: We also come from an era where getting on stage and performing, really honing the craft of performing on stage, was important. So lucky for us we have that background, and even though record sales are down, concert ticket sales are up, and that favors us, because that's what we mainly like to do. We like to perform.

CNN: When you left the spotlight, bands like 'N Sync and the Backstreet Boys moved in and flourished. Was it difficult for you to watch them take the torch and run with it?

Donnie Wahlberg: I found no bother in other boy bands taking the spotlight for a number of reasons: A, I was not interested in that spotlight myself. B, it was their time. C, we weren't even in a band anymore. I was doing other things ...

McIntyre: It sounds like a comedy skit where we're furious over it!

Wahlberg: Yeah, like "Damn it! Why are they being so successful?"

McIntyre: "We've got to find a way to ruin it!"

Wahlberg: When we came out, there was MTV, and that was it. And there wasn't room for another band like us. ... And when we went away, the music business changed. Suddenly, there were all these different avenues and outlets. ... So you could have three, four, five boy bands, and they could all be very successful. And that was more fascinating to me than anything else.

Anybody who was as successful as those guys were -- be it Backstreet or 'N Sync -- it takes so much hard work to be successful. I can only respect [that]. We had a backlash on us, so to come out as a boy band after us and to have the perseverance to succeed and overcome a lot of doors that were closed from people hating on us ... they deserve credit for that. And we deserve credit now for coming back and overcoming hurdles that are there now for us.

CNN: What are the biggest hurdles?

Wahlberg: The whole concept of us coming back, honestly, was met with skepticism by a lot of people. ... All the record companies thought when (other boy bands) were thriving, that was the time that we should come back. But it was their time; it wasn't our time. ...

The fact that 90 percent of the people who discussed this with us thought it was crazy or thought we'd do a barnstorming tour at best, that in itself is a hurdle, because we had to walk away. We had to all make a commitment to do this. We all had things in our lives that we were doing, that we were committed to. ...

But we believed, and fortunately the fans believed and came back in bigger numbers than we ever imagined and made a lot of people look wrong. It even surprised us.

CNN: Boy bands traditionally get a bit of a hard rap, don't they? You're often dismissed as overly choreographed, a little bit cheesy.

Wahlberg: I think it's easy to criticize things that you maybe don't quite know the story on. But the reality is, we're in the music business. John Mayer might be able to play the guitar better than any of us ... but we all signed record contracts. We've all made a decision to make our career in this business. So to scoff at people because they do something different or don't do what you would do is silly.

Fortunately, we haven't really found that this time around. I think people have come to understand that maybe we're a little bit different ... a little bit more of a grass-roots band than people ever gave us credit for. We weren't picked out of thousands of people. It was a very real story, how we came together.

CNN: Which one of you has changed the most?

Knight: I don't think any of us have really changed. We've matured; we've mellowed a bit. We have more wisdom, but personality-wise, we're all the same and it's good to see. And that's what made us in the past, and that's what makes us now.

Danny Wood: I think the change you would see (is when) each of us (is) individually at home with our kids and our family lives. But when we get together, it's all still the same.

Wahlberg: Jon has a British accent now. Danny won't take commercial airliners anymore. Jordan only greets fans with gloves. (They all laugh.) It's a joke!

All About New Kids On The Block