LOS ANGELES, California (CNN) -- Singer Chris Brown pleaded not guilty to both charges in the felony assault case against him Monday afternoon. 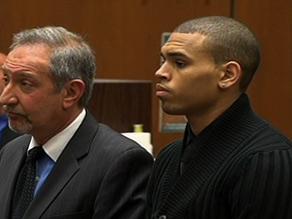 Singer Rihanna, the girlfriend Brown is accused of attacking, wants the case resolved without a trial, her lawyer said.

The only words heard from Brown, 19, during his brief appearance before Judge Patricia Schnegg were "not guilty," which he said twice as Schnegg asked for his plea on the two counts.

Brown is charged with felony counts of assault and making criminal threats. If he is convicted, the sentence could range from probation to four years and eight months in prison, the Los Angeles County District Attorney's Office has said.

The alleged attacked happened during an argument in February that began when 21-year-old Rihanna, who had been dating Brown, found a text message from another woman on his cell phone, according to a sworn police statement.

Rihanna's lawyer, Donald Etra, told reporters after Monday's hearing that his client "would prefer that the matter be resolved expeditiously and fairly."

"She believes that the quicker this case is over, the more quickly she can get back to her life and her career, which is exactly what she'd like to do," Etra said.

Rihanna, who is in her home country, Barbados, "is in fine spirits, she's doing fine," he said.

"She would be pleased if this were over quickly," Etra said.

He said there were "efforts on behalf of all of the parties to try to resolve the case expeditiously and fairly."

The goal is "to see if it can be resolved prior to the preliminary hearing and prior to trial," Etra said. "I think that would benefit everybody."

When asked if Rihanna would cooperate with prosecutors, Etra gave the same response he's given previously.

"If asked to testify, she will do so," he said.

He said it was "premature to speculate" what Rihanna might consider a fair plea deal for Brown.

When Brown appeared for his first hearing a month ago, Rihanna's lawyer asked the judge not to prohibit Brown from having contact with her while he faces felony charges of assaulting her.

The judge granted Rihanna's request, only warning Brown "not to annoy, harass, molest, threaten or use force or violence against anyone."

Court documents released last month revealed details about the case against Brown, including a police statement that the incident began when Rihanna, whose full name is Robyn Rihanna Fenty, found a text message on Brown's cell phone from "a woman who Brown had a previous sexual relationship with."

Brown issued a public apology for the incident in February.

Brown has not commented publicly since issuing that statement.

The next court hearing in the case is set for April 29.

CNN's K.J. Matthews and Denise Quan contributed to this report.

All About Chris Brown (Singer) • Rihanna