Pet Shop Boys come back with a lot of 'love, etc.'

(CNN) -- Twenty-five years after the hit single "West End Girls," can the Pet Shop Boys pull off songs that make you want to dance like it's 1984, but still reflect a social consciousness of 2009? 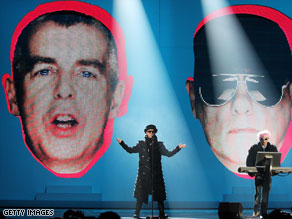 Neil Tennant and Chris Lowe, shown at the BRIT Awards in February, are releasing their 10th studio album.

The answer is the title of their latest album: "Yes."

The British duo will release their 10th studio album on April 21 in the United States through Astralwerks. "Yes" has been out in the United Kingdom through Parlophone/EMI since March 23, and entered the Billboard UK albums chart at No. 4.

"We thought that 'Yes' just kind of summed up the theme of the album. It's a positive, upbeat, euphoric pop album," keyboardist Chris Lowe said. "It's almost an answer to the question, 'Is that the Pet Shop Boys?' 'Yes!' "

Given how many different projects the duo has been involved with, it's a valid question. In addition to the studio albums, they've written a musical, "Closer to Heaven," and a soundtrack to Sergei Eisenstein's 1925 silent film classic, "The Battleship Potemkin."

For "Yes," the Pet Shop Boys worked with Xenomania, a production group known for collaborating with Cher and other pop stars. Xenomania co-wrote three of the tracks on "Yes" with Lowe and vocalist Neil Tennant, who write most of their own songs. Watch the official video for "Love, etc." on YouTube

The Pet Shop Boys, who recently won an award for outstanding contribution to music at the 2009 BRIT Awards, "felt very much at home" at the house outside London, England, that Xenomania has devoted entirely to music, Tennant said. Every bedroom has a studio, and bands hang around downstairs waiting to record amid the sounds of instruments, record mixing and talking. "You can hear this cacophony of music all day long," he said.

"Love, etc.", the album's first track and currently No. 2 on the Billboard Hot Dance Singles Sales chart, is a social statement about how money, shopping and celebrity don't necessarily bring happiness, while the third track, "Beautiful People," imagines that it must be great to have wealth and fame, Tennant said.

"At the end of the day, it's an old-fashioned sentiment, but love is more important, really," Lowe said of "Love, etc."

"Pandemonium," a love song inspired by the relationship between actress Kate Moss and singer Pete Doherty, was originally written for Kylie Minogue to sing, but she didn't use it, Tennant said. Media reports that they'll never work together again are incorrect, however, he said.

"I think they exaggerated that," Tennant said. "Yeah, so that's not true." (In a BBC story, Tennant and Lowe said they, like many songwriters, hadn't heard back from Minogue after submitting their material. "We won't be doing it again," Lowe told the BBC.)

Perhaps the most out-of-character song stylistically is the finale, "Legacy," a meditation on politicians leaving office ("You'll get over it" is the main message). Tennant identified it as his favorite because of the poetry and the mystery in the music -- "it continues to fascinate me," he said.

"The Way It Used to Be," a favorite track for both Boys, charts a relationship from its romantic beginning to its melancholic end, wondering "what is left of love" and longing to "leave our promises behind / rewind and try again."

With all this talk of love, Tennant is private about his own love life. As far as love in the album goes, though, "Some of it's real, and some imagination; some of it's memory," he said.

The duo did not meet in a pet shop, but in an an electronics shop in London in 1981. Tennant needed a piece of equipment for his synthesizer and, when he and Lowe started talking about music, the two hit it off.

"I'm always struck since then by the sort of amazing look of our meeting," Tennant said. "We happened to be in the same place at the same time, and it changed the rest of our lives. I always think it was an extraordinary thing."

They started making music as a hobby with an acoustic guitar and a synthesizer, and played drums by banging on the table, Lowe said.

"It's all been a gradual process really. We never sat down really and said, 'Let's become pop stars,' " Lowe said.

When they first recorded "West End Girls" together, the musical group did not have a name, Tennant said. They took the name Pet Shop Boys because they had friends who worked at a pet shop in West London known as the "pet shop boys." They thought the name fit with popular rap groups such as the Beastie Boys.

"It has actually no meaning whatsoever. Chris used to be embarrassed by it," Tennant said.

While influenced by hip-hop, electronic disco, and other genres from the beginning, the Pet Shop Boys have always emphasized the songs themselves, Lowe said, and they're not "purist" about what kinds of instruments get used.

In the beginning, they sampled everything from animal noises to broken glass for their songs. They even recorded the sound of a woman walking down a street in high heels for "West End Girls," and the ambience of a cathedral for the 1987 single "It's a Sin," Lowe said.

Their songwriting has perhaps gotten more sophisticated and experimental over time, Tennant said.

"In the '80s I never sang any harmonies on records. Now I do loads of harmonies. I'm turning into Brian Wilson!" Tennant said.

"Yes" continues the Pet Shop Boys' tradition of having one-word titles for albums, such as "Please," "Bilingual," and the more recent "Fundamental." The convention just developed and became a style that the duo decided to keep, Tennant said.

"It's like e.e. cummings not having any capital letters -- it's a signature thing," Tennant said.

The duo is determined to branch into new areas. Lowe and Tennant's next project is a ballet slated for 2011 based on a story by Hans Christian Anderson. Tennant said it is instrumental, and includes a mixture of electronic music and strings.

"The challenge of telling a story through music and dance is something that we're interested in," Lowe said.

Plans to tour the United States in the fall are under discussion, the duo said.

All About Pet Shop Boys