LONDON, England (CNN) -- Just because they named their new CD "Yes," does not mean that British electro-pop duo, the Pet Shop Boys, will agree to just about anything. 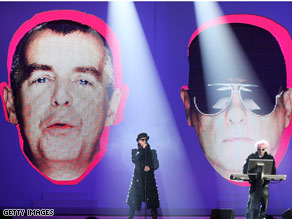 PETA has asked the Pet Shop Boys to change the band's name to Rescue Shelter Boys.

The band has turned down a request from an animal rights group to rename itself the Rescue Shelter Boys.

The organization, the People for the Ethical Treatment for Animals (PETA), sent a letter to Neil Tennant and Chris Lowe acknowledging that its request, at first blush, might appear "bizarre."

But, by changing its name, the band could raise awareness at every tour stop of the "cramped, filthy conditions" that breeders keep animals in before selling them to pet stores, PETA said in its letter. Read how the Pet Shop Boys got their name

The duo, which has performed under its current name for more than 20 years, reproduced PETA's written request in full on its Web site.

The musicians said they were "unable to agree" to the request "but nonetheless think (it) raises an issue worth thinking about."

The animal rights group said it was pleased the Pet Shop Boys had drawn attention to the issue by posting its letter so prominently on the band's site. Talking about its campaign on a blog entry, a PETA staffer wrote:

"I think I may have to stick "West End Girls" on my iPod right now to celebrate."

"West End Girls" is one of the many hits the group has had in its long career.

PETA is no stranger to oddball campaigns. A recent one was aimed to re-christen fish as "sea kittens" because "who could possibly want to put a hook through a sea kitten?"

All About Pet Shop Boys • PETA