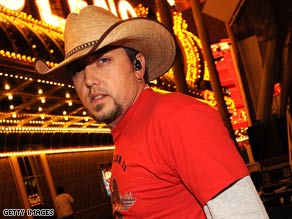 Jason Aldean has had six Top 10 country singles. His new album, "Wide Open," is just out.

But not Jason Aldean. He has a full head of hair, and wears a cowboy hat to signify his commitment to country music.

The same is true for his well-fitting jeans and cowboy boots.

It's a formula that seems to be working. The 32-year-old rising star has just notched his sixth Top 10 country single with "She's Country," the lead track off his third CD, "Wide Open" (Broken Bow).

We caught up with the Georgia native in his dressing room before a recent sold-out show at the House of Blues in Los Angeles, California. The following is an edited version of the interview.

Jason Aldean: Definitely a cowboy hat in L.A. makes you stand out a little bit.

CNN: It's a fashion statement in L.A.

Aldean: It is! You've got to wear it with confidence, too.

CNN: Are you nervous about your new album?

Aldean: I wouldn't say I'm nervous. If you have an album that you're kind of on the fence about, then yeah, you would be kind of a little nervous.

CNN: Have you ever had one of those -- or if you had, would you admit it?

Aldean: When we went in to record the second album (2007's "Relentless," which went gold), I think it was a good album, but I felt like I was under a lot of pressure recording that album -- more than the other two. You hear people talking about the sophomore slump and all that stuff, and so I think all that stuff sort of got to me after a while.

Combined with being on the road 200 to 250 days [a year], I just didn't have that much fun recording it. I was exhausted. And so going into this third album, I just feel like mentally, I was back in the right place.

CNN: As an artist, do you ever really think you got it right?

Aldean: If at any point you're recording an album and you think it's the greatest thing that you've ever done, and you'll never be able to top it, then you should probably quit. Michael Jackson -- he made "Thriller," so I can see why he might have said, "I'm done." But even he kept making records.

CNN: Were you a Michael Jackson fan growing up? Did you moonwalk as a kid?

Aldean: Of course! I had my glove and everything. Used to wet my hair so it looked like a Jheri curl. (Cracks up)

CNN: Who else did you listen to as a kid?

Aldean: Guns N' Roses -- the '80s rock stuff. Then I was into John Mellencamp, and Bob Seger and a lot of the Southern rock stuff -- the Allman Brothers, Lynyrd Skynyrd and the Marshall Tucker Band. I listened to a lot of different kinds of music.

CNN: Are you finding that the economy has affected ticket sales? Is it harder to sell out shows these days?

Aldean: I think everybody has kind of seen a little bit of a hit. We're no different. We've tried to make it more affordable for people to come to a show with lower ticket prices [most of the time in the $20-40 range]. Maybe go in and play a show for less money than we would normally go in to play a show for, just so people can afford to come out and buy a ticket.

I mean, you're looking at 200 bucks if you've got a wife and two kids -- and then by the time you come there and buy a couple of T-shirts, or some drinks or whatever, you're spending three, four hundred dollars, and right now, people are a little hesitant to do that.

CNN: What do you consider an expensive ticket?

CNN: From a financial standpoint, touring is more important to an artist than selling records these days.

Aldean: The music industry is so different now than it was even when I hit the scene in 2005. If you go to Wal-Mart and you want a song, you've got to buy the whole album for ten bucks -- or you can go to iTunes, and if you want a song, you can pay a dollar to get it. So in return, the record label is going to make less money, which is us making less money to pay them back.

The way it works is the record label basically fronts the money for us to record an album. As the money comes back in off of that, they take that and repay the debt that we owe them. So if they're not making enough to repay that debt, they're not going to keep us employed on the label for very long.

CNN: As an artist, do you worry about that?

Aldean: Oh, absolutely. I think every artist worries about that. As a consumer, I think iTunes is a great thing. As an entertainer, not so much. I would much rather have somebody buy an album as a whole.

Bad thing about purchasing singles -- if you have an artist you like and you keep doing that, there's not going to be music enough for you to go and get, because they're not going to have a deal anymore. But who knows? Record labels may one day be out all together, and people may be making their own music and selling it on their Web sites.

CNN: That seems to benefit established artists more than up-and-coming ones.

Aldean: Radio's really accepted us, and proven that they're really going to play my stuff as long as I give them something good to play. Fans are coming out to the show, so I mean what more could I ask for? My original plan when I got started in this deal was just to be able to make a good living for my family and play music. I've been able to do that, which is all I've ever wanted.