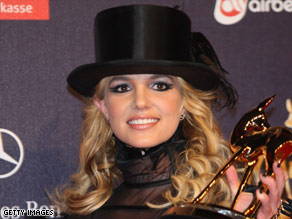 The arrest was made at Britney Spears home in Calabasas, California.

Security personnel found Miranda Tozier-Robbins looking through the windows of the singer's home in Calabasas, California, the department said in a written statement.

Tozier-Robbins also had a backpack and video equipment, the statement said.

Security personnel asked her to leave, but she "balked," the statement said. They then physically escorted her off the property. A policeman arrived later to arrest her.

She was booked on charges of trespassing and disorderly conduct, the statement said. Bail was set at $5,000, but Tozier-Robbins was released on a citation to appear in court on June 16.

The whereabouts of Spears, 27, during the incident were not immediately known.

All About Britney Spears