NEW YORK (CNN) -- Chester French is giving its music away. 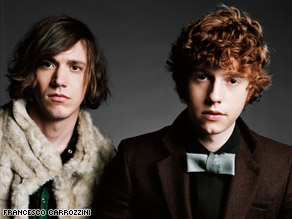 Chester French, Max Drummey, left, and D.A. Wallach are earning buzz as a band to watch.

Go to the duo's Web site and you can scoop up an entirely free "athletic-themed" album. The idea is that you'll be so impressed by the free stuff, you'll feel inspired to buy the band's official debut album, "Love The Future" (Star Trak/Interscope), which came out last month.

"We're doing something that's never been done by a band before," says lead singer D.A. Wallach. "It's great because when you put out free music, people can spread it around as much as they want. And right now as we're just trying to expose ourselves to more people. Every new supporter helps."

The band has even come up with a fancy name for its fans: "VIP Concierge Service."

So who are these two clever, skinny dudes who jokingly claim to "put in a lot of burn at the gym"?

Wallach and Max Drummey met at Harvard, but found music to be more interesting than their studies. Fortunately for them, sought-after producer Pharrell Williams liked what he heard and signed the group to his label.

So far things seems to be working out for Chester French (named for sculptor Daniel Chester French, though the group is sick of explaining). They won a place on Rolling Stone's "Artists to Watch" list in 2008. HBO's "Entourage" showed some love for their catchy single "She Loves Everybody."

Watch Chester French get punched by a pretty girl »

And then there's the transportation situation.

"Right now we're on the first tour bus we've ever had," says Wallach. "We were driving around in a van for the past year and a half and it's a real luxury now to be able to sleep while we're driving."

The band spoke to CNN about the challenges of navigating a rapidly changing industry, getting punched by a pretty girl in a music video and why the Beach Boys have nothing on them.

CNN: How does it feel to be called the next big thing?

D.A. Wallach: You know what, we actually haven't been called that in those words too often. But if we did, that would be very flattering.

CNN: Things get a bit violent in the music video for your song "She Loves Everybody." Who's idea was it to have you both get beaten up by an angry girl?

Wallach: It was the director's. We worked with Paul Hunter on the video and it was our first music video. ... He had the concept that love hurts. So this girl was going to take it out on us and we were going to be all about it and still smiling and enjoying it.

Wallach: Yeah it was great. It was painless. Actually we both got hit accidentally by her. I mean most of the hits were kind of staged punches. But we both got hit once each, and it was fun.

CNN: You're both Harvard graduates. Does that make you the smartest dudes in pop music?

Wallach: Probably not. We were kind of nerds in high school. And the hardest part about Harvard is getting in, people say. After that you take it at your own pace. And at different times we were more or less engaged there, but we met some other really intelligent, thoughtful people.

Max Drummey: And there's definitely a lot of stupid people at Harvard.

CNN: Tell me how you both met.

Wallach: We met in the dining hall our freshman year and we started the band with three of our classmates. It was just a funny hobby at first and it wasn't until sophomore year that we really got serious about it and said, "OK, let's actually try and make this a possibility as a career."

CNN: And didn't you record most of your new album on campus?

Wallach: Yeah, there was a recording studio in the basement of one of the dorms at Harvard and we were both recording engineers there. So we recorded lots for other people as well. And in our free time we were working on the record we just released, "Love the Future."

CNN: Is it true that there was a bit of a bidding war between Jermaine Dupri and Pharrell Williams (over the record deal)?

Wallach: No. ... There were several people all at once who were interested in working with us and it was a little awkward because they're all friends with each other. And since we've been working with Pharrell we've stayed cool with everyone. ... We couldn't have gone wrong.

CNN: Why do you think there's been all this interest from hip-hop producers?

Drummey: We're the hottest rappers out.

Wallach: I'm from Milwaukee, he's from Boston. They're both very diverse cities and we grew up with friends and all different kinds of music around us. So the records we make are inspired by a lot of different places.

And certainly having grown up in the '90s, hip-hop is a part of the soundtrack for us and so it's very natural for us to have learned things from Dr. Dre or Pharrell and people like that.

CNN: A lot of people compare your sound to the Beach Boys. How do you feel about that comparison?

Drummey: I mean we're definitely better. And we came first too. So it's sort of a ridiculous comparison.

CNN: Don't you play the theremin?

Wallach: There are only a couple of people who play it at a virtuoso level. You'd have to really have something off to put the time in as a theremin artist.

CNN: What has been the most surprising aspect of the music business so far?

Wallach: I think the biggest surprise has been that people don't really know a hundred percent what they're doing. Everyone is trying to figure out how the music business is going to look in 10 years.

And as a new artist there's not a blueprint. I figured you'd get signed and you're instantly on billboards. And the reality of it is that we find ourselves in a situation where all we can focus on is building our audience one person at a time. And it's just a brick-and-mortar, nose-to-the-grindstone process.

CNN: What musicians do you admire as being fellow brainiacs?

Wallach: Trent Reznor from Nine Inch Nails I think is really brilliant, not just on a musical level. Pharrell's been incredibly helpful and his advice is always really apt. Jay-Z. Really, when you're in the thick of it, anybody who's built a real career has something figured out. Or they got really lucky.