Promoter: Michael Jackson 'as healthy as can be'

(CNN) -- Contrary to a report in a British newspaper, Michael Jackson does not have skin cancer, says Randy Phillips, president and CEO of AEG Live, the promoter of the King of Pop's upcoming concerts at London's 02 Arena. 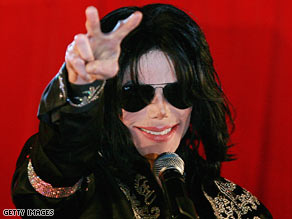 Michael Jackson gestures to the crowd at the March announcement for his series of London concerts.

"He's as healthy as he can be -- no health problems whatsoever," the executive told CNN.

Phillips said he asked Jackson point-blank about the skin cancer rumor yesterday, and the entertainer just brushed it off and laughed.

"He's used to rumors like this. He's been famous ever since he was 5. He doesn't read the newspapers or watch news reports," Phillips explained.

He also had an answer for an item in the British tabloid The Sun that said Jackson had been "making regular trips to a dermatologist in Beverly Hills wearing a mask and surgical cap."

"Michael is very close friends with his dermatologist. It's as simple as that," said Phillips.

According to Phillips, the 50-year-old pop star had passed a stringent physical exam before he and AEG inked their deal for Jackson to headline a 50-show residency at 02 beginning July 8. "And he'll have to take another before the shows start," he offered.

Phillips also told CNN a tour with sister Janet Jackson and other performing members of the Jackson family was "never in the works, at least from Michael Jackson's side."

He added, "Never say never, but right now, he's focusing on his own show. It's not about his family."

"He's working out every day with his choreographers and his dancers. He's in better shape at 50 than I was at 30," Phillips laughed.

Phillips took the opportunity to knock down a couple of other rumors. "For now, he has no plans for his kids to be in the show. And there are no elephants. No elephants in the show, and he's not dying of cancer."

Phillips said the London shows were the first step in a multi-phase package with Jackson that he called "more than a 360-degree deal."

He said there are also plans for recorded music and movies, including a 3-D live concert film and a 3-D movie based on Jackson's 1983 "Thriller" music video.

Phillips didn't rule out a tour or a concert residency in another city, stating it would most likely start in Europe, then roll out to Asia, North America and South America.