What will save rock 'n' roll? 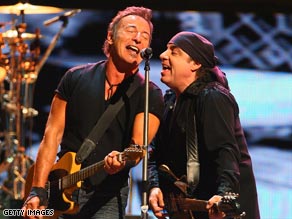 Steven Van Zandt (right) wants musicians to have a sense of history and care for their craft.

"I want to spend just a minute on a topic that never ever gets discussed in the music business -- the music," the Bruce Springsteen guitarist and "Sopranos" star said in a speech to the SXSW music and arts festival in March. "The reason nobody wants to talk about it is because it mostly sucks!

"Who are we kidding here?" he said. "Nobody's buying records? Because they suck!"

He called the speech "A Crisis of Craft," and implored listeners to get back to rock 'n' roll's roots. Learn how to play cover songs, he said. Get people to dance. Harness your working-class energy. Take pride in craft.

It's been two months since that speech, and Van Zandt is still passionate about the subject.

"[Rock 'n' roll] is a craft that has to be learned," he tells CNN. "There are things you learn by listening to great records, copying heroes." He believes that he said some things that people were thinking, but haven't said out loud.

But the rumbles are out there. The music business is in a state of flux, with the sales of more profitable CDs continuing to fall even as single downloads climb. "American Idol's" season is coming to an end, with rock purists once again assailing the show's slick pop sensibility. Commercial radio, country, rap and hip-hop -- they all have their critics, many of them wishing a return to the way things used to be. Blog: What do you think of the state of rock 'n' roll?

Van Zandt has sympathy for all sides, coming at the issue from what he calls "a unique perspective" -- he's a musician, a DJ (with his radio show and Sirius XM channel, "Little Steven's Underground Garage") and record label honcho (Wicked Cool Records). He's quick to observe that he's not slamming all pop music. There's vibrancy in some hip-hop, he says, and he admires "Idol," particularly when it promotes music history.

"But it's quite an alien world to my traditional rock 'n' roll world," he adds. "It has nothing to do with it."

Within that rock 'n' roll world, he worries. Today's bands, he says, look down on performing covers, and as a result many have gotten lost in a musical wilderness. "The result is an extraordinary amount of mediocrity," he says. "There are no standards to live up to."

Which is part of the problem with rejuvenating rock 'n' roll, says Steve Greenberg, founder of S-Curve Records, which includes alt-rockers Tinted Windows and We The Kings among its acts.

Technology is one problem, he observes. "I think in the old days, in order to even be decent, it took a lot of work," he says. "And today, relatively untalented and uncreative people can actually make rock 'n' roll music that sounds kind of decent. And I think that kind of fools people and causes people to be lazy."

But for Greenberg there's also a sense that the "square pegs" -- the naturally rebellious types -- are getting shoved in round holes. "A lot of opportunities inevitably these days go to people who fit the format, whether the format is Top 40 radio or 'American Idol' or [Radio] Disney or whatever it is," he says. "There's so much pressure to fit those slots. And it's the square pegs ultimately who are going to change the world."

The spirited Greenberg wants to channel that rebellious energy. He's high on a band he signed named Care Bears on Fire, a trio of 13-year-old Brooklyn girls who sound like the Ramones with a touch of Shonen Knife.

"Their attitude is maybe one size doesn't fit all," he says. "I feel like the spirit of rock 'n' roll lives in those guys. ... They're having fun playing rock 'n' roll."

Scott Booker, the manager of the avant-pop band the Flaming Lips ("She Don't Use Jelly," "Do You Realize??"), is also hoping to foster creativity. He's serving as the CEO of the Academy of Contemporary Music, a music school based at Central Oklahoma University. Drawing from a British concept, the school plans to offer courses in music, music production and the music business, many starting this fall.

Booker observes record labels aren't spending as much money on developing talent. He hopes the ACM not only makes bands more signable, but also teaches them business strategies, such as setting up their own label and distribution apparatus.

"This could become a think tank for how the industry could go," he says, musing aloud. "People think of music as a throwaway cultural item [nowadays]. I want to change that. ... Make things more exciting."

Technology, adds BMI executive Phil Graham, can also be rock 'n' roll's friend. "The opportunities the digital world give the population as a whole to throw their talents to a very wide audience is a very good thing," he says. More people have gotten the chance to put their music out there and connect with fellow music lovers, he says.

Of course, there are also old-fashioned connections. BMI sponsors dozens of showcases for new acts; young bands play clubs and hawk their CDs (or Web page). Van Zandt welcomes the efforts, but hopes there's also a connection to rock 'n' roll history. He's founded a Rock and Roll Forever Foundation to foster music education in schools. (To its credit, the Rock and Roll Hall of Fame and Museum has similar programs.)

"The spark comes from whatever people are into these days -- and that very well may be 'American Idol,' " he says. "You start with whatever singer you're rooting for, and you start to trace back where they come from. It's up to the artists themselves to make sure that their fans know where they're coming from, to make it clear that music doesn't fall off trees."