Sly Stone steps up for daughter 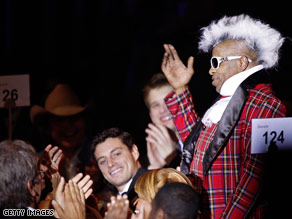 Don't call him that anymore, because the superstar who blended funk, rock, soul and psychedelic sounds in the 1960s and '70s before disappearing from the scene in the '80s is not in hiding, his youngest daughter said.

Stone's media shyness in recent decades earned him a comparison to the late billionaire recluse Howard Hughes, but he's just been living his life and making his music out of the glare of great expectations that superstars suffer.

"It's not like he wasn't making music," said Novena Carmel, his 27-year-old daughter. "He was enjoying his life and riding motorcycles, one of his passions."

Now 66, Sly Stone is talking to interviewers again and sometimes taking the stage at Los Angeles clubs with Novena and her group, BabyStone.

"She is the force that keeps him straight," said Anthony Valadez, a disc jockey with Los Angeles public radio station KCRW. "I think it's her energy and their bond that is so sacred that keeps him in line. That's what brings Sly out."

The Sly and the Family Stone founder gave a rare interview to KCRW's "Morning Becomes Eclectic." Though it airs Monday, the interview was taped days ahead -- given Stone's 40-year reputation for not showing up for concerts and interviews.

Sly Stone -- who was Sylvester Stewart before changing his name as a radio DJ -- didn't reminisce in the interview about past troubles. Guest host Chris Douridas kept the conversation about the music.

He said he was a child, performing in his family's gospel group, The Stewart Four, when he first realized the power music has over people. It happened as he sang "On the Battlefield" during a Sam Cooke show at the Oakland Auditorium when he was 4.

Stone now says he didn't know then where he was heading.

Stone wrote his first hit song for someone else. Bobby Freeman made "Come On and Swim" a Top 10 pop hit in summer 1964.

When he formed Sly and the Family Stone in 1966, the mix of race and gender was unusual for its time.

"It was on purpose -- that's what I intended to do," Stone said.

The songs appealed to white and blacks equally and regularly topped both the pop and R&B charts.

"Hot Fun in the Summertime" -- released in summer 1969 -- might be a tribute to the fun of summer days to one listener, while another might see satire about the summertime race riots of the late '60s.

Stone set the stage for other superstars to follow, but the band dissolved after one hot decade and success became as elusive as Stone.

Novena may understand her dad better than anyone these days. She's lured him back to the stage for several performances, which she avoids calling concerts. With those, "people expect certain things," such as wanting performers to be what they were 30 years ago, she said.

Instead, it's the "Sly Stone Variety Show," which allows her father "to do whatever he wants to do in the moment."

"It's very wild, in the sense that they have the Sly Stone trivia game onstage with diehard fans," said Anthony Valadez, who has been to several.

Novena also knows to not plan too far ahead with her dad, so he doesn't have time to back out.

"If it's done quickly, then it works," she said. "But if he has a tour, then there's a lot of expectations that you have to meet for everybody to be happy."

"My dad would be like, 'I wanna do a show as soon as possible,'" she said. That gives her just about a week to get the show together and promote it.

P-funk architect George Clinton and actor-comedian Eddie Murphy showed up for the last one, which was a sold-out celebration of Stone's 66th birthday.

One indication that Stone has changed his no-show habit, which marred his reputation in younger days, is he actually arrives for shows early, Valadez said.

"Coming early to these gigs, you watch Sly and his affection for his daughter and it's evidence he would do anything for her," he said.

Stone's complete interview can be heard at KCRW.com.

All About Sam Cooke • Sly Stone