Steve Martin and his passion, the banjo

LOS ANGELES, California (CNN) -- We were scheduled to speak with Steve Martin just after his sound check for a concert in Los Angeles to benefit the city's public libraries. We pulled into the parking structure 45 minutes early when my cell phone rang. It was Martin's publicist. 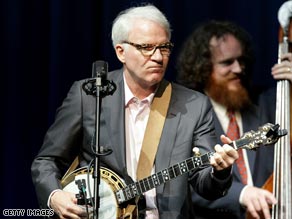 Steve Martin has been playing the banjo for decades. His new album is a collection of bluegrass tunes.

"Hey, where are you?" she asked urgently.

"Can you get up here quickly? He's ready."

A musician ready early? There goes his street cred.

Interviewing Martin can be like an awkward first date. Like many comedians, he's polite, but he sometimes struggles to make eye contact, gives monosyllabic answers and leaves the impression that he wants to be anywhere but talking to you.

But when the subject is his new album, "The Crow: New Songs for the Five-String Banjo," he's chatty, enthusiastic and engaged. On the CD, the comic/actor/novelist/playwright/musician shows off his picking skills as well as his ability to craft witty bluegrass songs with titles such as "Hoedown at Alice's," "Wally on the Run" and "Late for School."

It's been his passion for 45 of his 63 years. This past weekend, the ultimate Hollywood hyphenate made his debut at the Grand Ole Opry.

"The Crow" has received more than respectable reviews, but that's not surprising, given Martin's uncanny ability to excel in whatever he does -- except maybe idle chitchat. The following is an edited version of the interview:

CNN: People know you as a versatile artist, but now it's about the banjo and your bluegrass album, "The Crow: New Songs for the Five-String Banjo."

Steve Martin: I did a lot of things when I first started out. In order to be in show business, I juggled, I did magic tricks, cards tricks and I played the banjo.

CNN: You've been playing it for 45 years, right?

Martin: Yes, I have. It's a long time, and I remember when I was going through a particularly difficult time of learning, I'd go, "Well, if I just stick with it, one day I'll be saying, 'I've been playing for 40 years.' "

CNN: Picking up the banjo might seem likely if you grew up in the Appalachians -- maybe Kentucky or somewhere down South. But you grew up in Garden Grove, California. This is the O.C.

Martin: There was a lot of musical activity in Orange County in the 1960s. There were the Dillards, and Doc Watson would come by, Ramblin' Jack Elliott, all these different players. I also had this friend, John McEuen, in high school, and he played, and he actually produced this album now -- 45 years later. [McEuen is a founding member of country-bluegrass group, the Nitty Gritty Dirt Band.]

CNN: Isn't John the one who taught you how to do an "Open D" tuning on the banjo?

Martin: Yes, he did.

CNN: See, I read your CD liner notes. [Both laugh] There's a cute little story in there about taking a photo of the three things you love most -- your wife, your dog and the banjo.

Martin: Well, we all love more things that that. I just happened to take a photo, and there was my wife, my dog and my banjo, all in the same shot -- and I thought, "Oh, that's like a family portrait right there."

CNN: Sounds like your next Christmas card to me. ... You're playing a benefit for the Los Angeles Public Library.

Martin: As you can see, it's sold out [gestures to an empty room]. ... You know, it's also a little bit sneaky, because doing a benefit takes the pressure off having to be so great. This is the first time I've really played banjo live as a concert -- ever. I mean, I've played a song or two, but I've never done a dozen songs, so I hope people will be forgiving.

CNN: Are you nervous at all?

Martin: No butterflies, but it's very different playing music onstage if you're not used to it. I mean, doing comedy is one thing. I used to get nervous on that, but I was very practiced. I'm as practiced as I can be. I'm performing with the Steep Canyon Rangers, a group I met in North Carolina. They're a renowned bluegrass group -- young men who play and sing really, really well. I'm lucky to have them.

CNN: You've won three Grammys and an Emmy. You do all kinds of things -- a modern-day Renaissance man.

Martin: Well, in a strange way, I don't have a job, so I have a lot of time on my hands. When I do work, it might be very concentrated, and it might be months where you're not really doing anything except maybe playing the banjo or writing something. You know, there's a lot of time in the day if you're not working 9 to 5.

Martin: It's been a long life.

CNN: So have you decided whether you're going to embark on a full-fledged tour?

Martin: I'm kind of seeing if -- you know, I haven't really performed for a long, long time -- 30 years live onstage. You know, I've done things like host the Oscars and things like that. But it's a little different. You have to get comfortable, you really have to know what you're doing, and it has to be almost boring to you to be able to do it well. You have to be so confident. I need to get some shows under my belt just to feel really good about it.

CNN: They always say comedians are the least confident people in the entertainment industry. Do you feel like you're not confident?

CNN: When you guest-hosted "Saturday Night Live" in January, you performed one of the songs on your new album -- which you immediately made available on the Web.

Martin: It was an exclusive release on Amazon because I knew I was doing "SNL," and I wanted the record to be available, and the only way you could get it available that quickly was electronically. And now it's out on Rounder in a more normal release now.

CNN: Are you a big iPod guy who downloads stuff constantly?

Martin: I do, a lot. I find a lot of songs that way. I use the Internet a lot to find music. I always download it legally -- especially my own songs. [Laughs] I think it's very important to keep that honor among yourselves.

CNN: Who do you find a lot of your fans are musically? Are they people who have followed your career from the early days of "SNL"?

Martin: I honestly don't know. It's too new. I don't know if there are any fans. I know that the record sold really well on Amazon, but you know there's a bluegrass audience for bluegrass music, and there's probably an audience that wants to see, "OK, let's see if this idiot can play."

Martin: We'll see tonight. [Laughs] I do have a record out.