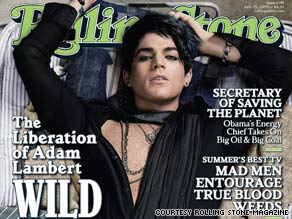 Adam Lambert talks about his sexuality and his "Idol" experience in the new Rolling Stone.

"I don't think it should be a surprise for anyone to hear that I am gay," Lambert told Rolling Stone magazine.

He said he is "proud of my sexuality" and never sought to hide it during the "Idol" competition.

Still, he stayed silent when, in March, a picture of him, dressed in drag and kissing an ex-boyfriend, emerged online.

Lambert told Rolling Stone he was worried coming out would "be so sensationalized that it would overshadow what I was there to do, which was sing."

The photo was taken on one of the three or four times he's dressed in drag, Lambert said, "but 'sucking my boy's face? Yes, that I will own.' "

He took down all of the pictures on his Facebook and MySpace pages before the "Idol" season, but he forgot about another Web site profile that included the drag photo, he said.

Watch Lambert pose with a snake for the cover »

With the competition over, Lambert's public confirmation of his homosexuality is in preparation for the "American Idol" national tour, which starts next month.

He said he wanted to avoid "the Clay Aiken thing and the celebrity-magazine bulls--t."

"I find it very important to be in control of this situation," he said. "I feel like everyone has an opinion of me, and I want a chance to say, 'Well, do you want to hear how I really feel about all this?'"

Aiken, the runner-up on "Idol's" second season, dodged questions about his sexuality until coming out in People magazine last year.

Lambert said his coming out is not a political statement.

"I'm trying to be a singer, not a civil rights leader," he said.

The Rolling Stone article revealed some "bi-curious" ambiguity for Lambert, whose tall, dark and handsome looks appealed to the female audience.

"I loved it this season when girls went crazy for me," he said. "As far as I'm concerned, it's all hot."

He said he is "kind of interested" in girls.

Lambert made another revelation to Rolling Stone that might not be expected.

His decision to audition for "American Idol" came after a week at Burning Man -- an annual festival held in a Nevada desert -- where he experimented with "certain funguses."

"I had a psychedelic experience where I looked up at the clouds and went, 'Oh!' " he said. "I realized that we all have our own power, and that whatever I wanted to do, I had to make happen."

And what he wanted to do was be on "American Idol," he said.

"I knew it was my only shot to be taken seriously in the recording industry, because it's fast and broad."

All About American Idol