(CNN) -- Each day an estimated 6,000 Americans will try marijuana for the first time. It's the most common illicit drug in the United States with nearly 15 million people using it at least once a month. 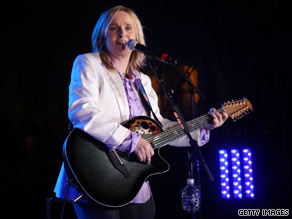 Melissa Etheridge took medical marijuana to help her through her chemotherapy.

All this week, "Anderson Cooper 360" is taking a close look at the deeply divisive issue of drug legalization in a series of reports. It's a special "360" investigation called "America's High: The case for and against pot."

The topic of medical marijuana inspires particular controversy. As of right now, 13 states have laws that permit marijuana, also know as cannabis, to be taken for medical conditions. There is no prescription for cannabis; instead doctors issue a recommendation in these states.

But is it safe? Is it effective? Does it actually work?

Melissa Etheridge says it worked for her. The Grammy Award-winning singer- songwriter turned to marijuana after she was diagnosed with breast cancer in 2004.

Watch Etheridge talk about how marijuana affected her »

In an interview, Etheridge talked to CNN's Anderson Cooper on why she did it and how she believes it helped restore her health. She's now pushing for its legalization.

Anderson Cooper: Grateful because it changed your life?

Etheridge: It changed my life; woke me up totally.

Etheridge: It was just a general pain of your body dying, of all your cells dying. Your appetite is gone. And you are nauseous. And your hair is falling out. Your skin -- it's like death. And the only thing I could do is lay there. I can't -- it hurt to -- light hurt, sound hurt. I couldn't read anything. I just laid there.

(Etheridge didn't want to use Vicodin or other prescription pills, she said.)

All of these things have side effects. So, the steroids and the pain relief that they give you on that first day when you go into chemotherapy causes constipation. So they will -- here is a pill for the constipation which will give you diarrhea. And you get huge side effects from all of this.

Cooper: The first time you did [marijuana], it made a big difference?

Etheridge: Instantly -- and instantly within a minute relieves the nausea, relieves the pain. And all of a sudden I was normal. You don't take medicinal marijuana to get high.

Cooper: So you weren't getting high?

Etheridge: No you don't get a high. No it's not a high. It was normal. And I could -- all of a sudden I could get out of bed. I could go see my kid. And it was amazing. (Etheridge often didn't smoke; the marijuana was mixed into butter and spread on food, or run through a vaporizer.)

Cooper: Did you ever worry about becoming addicted? They were saying this is a gateway drug?

Etheridge: No. Not at all. If you were on that side, you would understand what I mean. It is almost laughable to think that you could be addicted. This is not at all.

Cooper: You mention you still have a prescription. Do you still use marijuana?

Etheridge: Yes, I do. The effects on my gastrointestinal system leave me with a real intolerance for acid of any kind, and so acid reflux is a constant problem. I don't want to take the little pills that they give you that have all the side effects to help with that.

And I do use it -- I'm one of the users that would like in a stressful situation or maybe when I've eaten that cheese pizza with my kids that I will do that and it settles -- totally completely settles all that.

Cooper: Most people eat the cheese pizza after the marijuana.

Etheridge: That is true.

Cooper: You've got it backwards.

Cooper: There's more than, I think, 200,000 people in California who are registered to receive medicinal marijuana. Do you really believe that all those people though have legitimate reasons to be getting marijuana?

Etheridge: Yes. Who are we to say what a legitimate reason is? If it helps somebody at the end of the day instead of drinking a couple of glasses of wine, to have a few tokes, who are we to say? Why must we in this country be so judgmental about this? These people are not hurting anybody. They are not hurting themselves.