'King of Pop' was major influence on younger artists

(CNN) -- Few have had a bigger influence on today's musical artists than Michael Jackson. 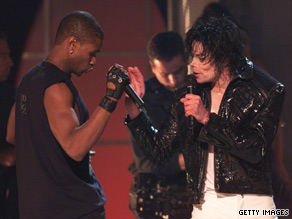 Younger singers, from Justin Timberlake to Usher and Chris Brown, have emulated his dance moves, his look and his sound.

He was, for many, the ultimate performer.

"[His influence] feels like something that is instilled and embedded in anyone who wanted to create anything musically," said Marsha Ambrosius, one half of the duo Floetry that wrote the single "Butterflies."

"He will always be the King of Pop, and no one will ever be able to fill those shoes with those shiny socks and that glove," Ambrosius said.

For many of the younger generation, he was the first to not just cross over but explode onto the pop charts from the R & B scene.

His phenomenal talent and worldwide appeal made his throne one to be aspired to even as they stood in awe of him.

"If you're a singer and you don't want to be like Michael Jackson, something is wrong," said 19-year-old singer and rapper Sean Kingston, who scored a hit in 2007 with the song "Beautiful Girls." "He's a huge influence."

Sonia Murray, a longtime Atlanta-based music columnist, said Jackson was for the younger set what James Brown had been for Jackson: an inspiration.

"It was the many dimensions he had as a performer," Murray said. "A lot of those artists strive to be all around entertainers. Michael looks to James Brown and Sammy Davis Jr. and for the younger guys, he was the closest thing they had."

His music videos were must-see TV, and aspiring artists learned that it took more than just holding a microphone if they really wanted to make it big.

"He was the total package," said Gail Mitchell, senior editor for R & B and Hip-hop for Billboard. "I was talking to somebody the other day about what trends they were seeing, and they said that a lot of the acts these days seem to going back to the whole entertainer thing."

"It's not just good enough anymore to lip-synch or program your computer, but some of these newer artists are more concerned about putting on a great show for their fans."

Steve Greenberg, founder and CEO of S-Curve Records, was a disc jokey in Tel Aviv, Israel, when "Thriller" first dropped and witnessed first-hand how Jackson became an international icon.

Greenberg said Jackson "influenced everyone who has come after him."

"He's been around so long that everyone on the contemporary scene has come after him," Greenberg said. "His was the first very contemporary, very exciting dance music to emerge after the death of disco."

He was a favorite of rappers to sample and working with him was a badge of honor in the industry.

Producer Dallas Austin worked with him on Michael Jackson's "HIStory: Past, Present and Future" and, like the rest of the world, was stunned by his death.

"Michael Jackson was a magical person to work with," Austin said in a released statement. "I am saddened by his death. The world won't be the same without him."

Even for the most hardcore in hip-hop, there was no shame in admitting love for the King of Pop.

"Michael Jackson has always been an inspiration to me as far as his music is concerned," Rapper Snoop Dogg told MTV in 2001. "You can't take nothing from him."

"He made me believe that all things are possible, and through real and positive music, he can live forever," Jean said. "I love Michael Jackson. God Bless him."

Floetry member Marsha Ambrosius said she felt blessed to have spent two weeks working with Jackson in New York City a few years ago after he fell in love with a song she had written.

She had the opportunity to get to know him, not just as a superstar, but as a fun-loving family man who stayed in touch with her even after the project was finished.

"He was one of the most amazing people you would ever want to meet ," she said. "I can say I worked with the most incredible artist on planet Earth."