NEW YORK (CNN) -- For someone who claims to be incredibly laid back, Jason Mraz is certainly piling up the accomplishments. 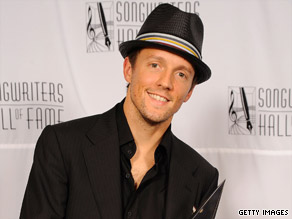 Jason Mraz was recently honored with a songwriting award for his work, which includes the hit "I'm Yours."

The singer-songwriter was the recipient of the Hal David Starlight Award at last week's Songwriters Hall of Fame inductee ceremony in New York. The honor typically goes to newcomers striking a chord in the music industry.

Or, as Mraz puts it, "I hope it has something to do with their savvy freshness."

Mraz, who turned 32 this week and took his parents to the celebratory dinner at the Marriott Marquis Hotel in Times Square June 18, says he feels great about the honor.

"I never thought my songs would escape my bedroom," he said. "To have the music shared all around the world, and to be acknowledged by communities like this ... it's inspiring."

Mraz's 2008 album "We Sing. We Dance. We Steal Things" has been a runaway success, with more than 2.5 million copies sold worldwide. It also led to three Grammy nominations, including song of the year and best male pop vocal performance for the reggae-inflected hit "I'm Yours."

A fan of maintaining a diet of predominantly raw foods, Mraz is also a farmer of sorts: He owns an avocado farm in his home city of San Diego, California. He's also a juggler, a skill Mraz taught himself during the downtime that comes with touring.

Mraz shared tales of his avocado farm, as well as what it's like to get the cold shoulder from Simon Cowell, when he sat down with CNN recently.

CNN: So, you live on an avocado farm. What's that like?

Jason Mraz: It's fantastic. Anytime you're harvesting something in your yard -- whether you have a small herb garden or I've got avocados, and now we have a solar system so we're also harvesting sun energy, which is great -- for me that's when I became an environmentalist.

I was like, "Wait a second. This is my environment. This is my piece of the Earth that I'm responsible for." Yes, the trees give me avocado and fruit that we sell and we eat tons of, but I feel like I have a role to play back to that, too. So it's cool.

CNN: So if you're at home, daily how many avocados would you eat?

CNN: So you must have very nice oily skin.

Mraz: I do, thank you. It's the avocado. I just lather it on.

CNN: Do you really?

CNN: Do you cook?

Mraz: I prepare. There's not much cooking in our household. We do a lot of raw food so it's more about putting the right ingredients together to create something scrumptious. See Mraz's chocomole recipe

CNN: When eating healthy is so important to you, how difficult is that to maintain when you're traveling around the world so much?

Mraz: Well, I bring tons of backup supplies with me.

CNN: How did you like performing on the "American Idol" final? (Mraz performed "I'm Yours" with contestants Anoop Desai and Alexis Grace.)

Mraz: I loved it. It was such a great event. And I have compassion for every one of those kids that dares audition.

I wasn't a contestant. I was just there to sing, and when I saw Simon at the end of that panel I freaked out. I was like, "What does he think?" And then I had to stop myself and say "Dude, you're not a contestant." He's aloof. But I watched during the rest of the night and he did it to all the acts. That's just his way.

CNN: Do you think you could hack it as an "American Idol" contestant?

Mraz: It is really tough. I watch what those guys do backstage between songs and their weekly schedule is super intense -- to learn new songs, to shoot videos, to learn dance moves and all this. They actually go through a pretty amazing transformation during the course of that show. I just don't know that I could commit myself to something like that. I'm a little more laid back. And some days if I can't show up to work, I don't show up to work. And I love that (laughs).

CNN: Were you surprised by the success of "I'm Yours"?

Mraz: Very surprised. There's something simple about it ... like a nursery rhyme. I thought it was so playful. I never expected the world to really grab it and run with it the way they have.

CNN: Can you talk me through how you went about writing that song? Where were you? What were you doing?

Mraz: I was at home. It was a sunny afternoon. And just as any afternoon where I play music, I was playing on an electric guitar, just chugging around, feeling a little reggae in me you know, and the melody and the words just started to pop out rather quickly and so I recorded it rather quickly. And the whole process only took about a half an hour.

CNN: You're about to go overseas to play various festivals. Is there anywhere you'll be going for the first time?

Mraz: This year we're going to explore South America, which I've visited as a tourist, but I've never taken my music down there. I hear the crowds turn up in masses, so I really want to see what that's like. I love getting to bounce around and explore so much. I love Scandinavia. I love Spain. It's so mystical and romantic, yet it's gritty.

CNN: Do you speak Spanish?

Mraz: No, but I have the Rosetta Stone. I have begun my level one training.