(CNN) -- Carly Smithson wants to make one thing clear: She is not the new lead singer of Evanescence. 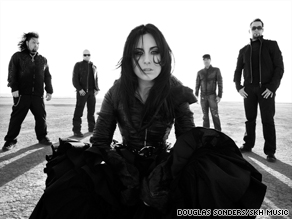 Former "American Idol" contestant Carly Smithson is the lead singer of the new band We Are The Fallen.

There may be some confusion because the former "American Idol" contestant has joined forces with original Evanescence members Ben Moody, Rocky Gray and John LeCompt for the new band We Are The Fallen.

The dark-haired Irish rocker made it to the top six during season seven of "American Idol" before being eliminated.

Smithson said that since then, quite a few opportunities have come her way that were not a good fit. This new band, which also includes bassist Marty O'Brien, is perfect for her, Smithson said

"I've said many times about Evanescence that we caught lightning in a bottle ... and I think we are doing it again," he said. "Carly is a good fit for the band because more than anything she is a brilliant, brilliant vocalist who is very down to earth and a humble person. She wants to do something where everyone is involved rather than being a posturing diva."

Smithson recently spoke with CNN about why she is thankful to Moody's roommate, why the group gets along so well and how they want to collaborate with fans.

CNN: You must be pretty psyched about this new band.

Carly Smithson: I am. It's pretty awesome and everything I think we have all ever wanted. We all blend together and it's all about making business.

CNN: With all of the opportunities that have come your way since "Idol," why go this route?

Smithson: I had a lot of the wrong opportunities approach me. They were very flattering offers, but musically not on the same page with where I envisioned myself.

As soon as Ben [Moody] came to me, he was actually someone that I had in mind, after coming off the "Idol" tour, to go and try and work with. He's worked on some music that I had a lot of respect for and really admired, but he was busy, oddly enough, working on this project.

CNN: So how did you two connect?

Smithson: He had never watched "American Idol" and he didn't know who I was. I am good friends with his roommate who recently moved in and I had met him briefly. My friend came and saw me live and then planted the seed in his head.

She said, "You should really consider my friend for this band," and he said "Who is your friend?" She said, "You know, the girl you met down the basement," and an artist he has been working with played him a bunch of YouTube clips of me.

We were hanging out at about one in the morning and he called my friend and said, "I just watched your friend. I should have done this a long time ago. Where is she, when can I meet her, I need to meet her right away."

She said, "Well, actually we are out right now and we're going to be at the house in about 20 minutes." We came back to the house and we had a meeting which lasted until about 4 a.m. ...

Obviously it was a decision I needed to make very fast because they were looking for a singer and people don't wait forever. I called my manager and it was a done deal pretty much the next day.

Smithson: Everybody was very excited and thought it was the right direction to go. I'm happy that it happened in such an organic way.

It's really weird, but as people we are all very alike. We all like the same jokes, watch the same TV shows and play the same music. It's great.

CNN: Do you at all feel pressure because of the success that Evanescence had?

Smithson: No, because this is a new band.

Evanescence is still out there. We are not Evanescence and our band isn't here to follow.

We are here to compete with ourselves and put out something epic.

CNN: What does the name mean?

Smithson: It's more of a statement rather than a name. We feel like our fans can say "We Are The Fallen" as well as us. It's not just a band name, it's kind of like a movement name.

We are trying to create a group of people that are in to the same thing. It's a collaboration of our fans and us appreciating music that we are making.

CNN: So what do you all stand for, since you want the fans to be a part of it.

Smithson: Freedom. Every since we all came into this band, we feel so free to go and be who we are. I embrace that.

All About American Idol • Music