LOS ANGELES, California (CNN) -- Michael Jackson knew "exactly how his fate would be played out" and feared his death would echo that of Elvis Presley, Lisa Marie Presley wrote in an online blog posted Friday morning. 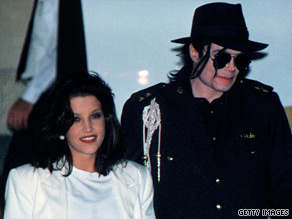 Michael Jackson and Lisa Marie Presley in 1994. Presley says, "I loved him very much" and believes he loved her.

Presley -- the daughter of Elvis, the "King of Rock," and the ex-wife of Jackson, the "King of Pop" -- wrote on her MySpace page that she wanted "to say now what I have never said before because I want the truth out there for once." Her publicist confirmed Presley wrote the blog.

She said her short marriage to Jackson -- from May 1994 until January 1996 -- "was not 'a sham' as is being reported in the press," but she divorced him because she was "in over my head in trying" to save Jackson "from the inevitable, which is what has just happened."

Jackson talked with her about his death during "a deep conversation" 14 years ago about "the circumstances of my father's death."

Watch more from Presley on Jackson »

"At some point he paused, he stared at me very intensely and he stated with an almost calm certainty, 'I am afraid that I am going to end up like him, the way he did,' " Presley wrote.

"I promptly tried to deter him from the idea, at which point he just shrugged his shoulders and nodded almost matter of fact as if to let me know, he knew what he knew and that was kind of that."

That conversation haunted Presley as she watched television coverage of Jackson's death Thursday, she said.

"A predicted ending by him, by loved ones and by me, but what I didn't predict was how much it was going to hurt when it finally happened."

Elvis Presley collapsed in the bathroom of his Memphis, Tennessee, mansion -- Graceland -- on August 16, 1977, at the age of 42. While his death was ruled the result of an irregular heartbeat, the autopsy report was sealed amid accusations that abuse of prescription drugs caused the problem.

"As I sit here overwhelmed with sadness, reflection and confusion at what was my biggest failure to date, watching on the news almost play by play the exact scenario I saw happen on August 16, 1977, happening again right now with Michael (A sight I never wanted to see again) just as he predicted, I am truly, truly gutted," she wrote.

"The hardest decision I have ever had to make, which was to walk away and let his fate have him, even though I desperately loved him and tried to stop or reverse it somehow," Presley wrote.

Their marriage, which some suggested was only to help Jackson's image, was real, she said.

"It was an unusual relationship, yes, where two unusual people who did not live or know a 'normal life' found a connection, perhaps with some suspect timing on his part," she wrote. "Nonetheless, I do believe he loved me as much as he could love anyone and I loved him very much."

Presley called Jackson "an incredibly dynamic force and power that was not to be underestimated."

Presley's blog entry ended with a thank you to those who would read it.

"I really needed to say this right now, thanks for listening."

Presley's blog can be found online at http://bit.ly/5wR7p