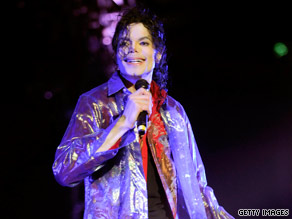 Michael Jackson, shown at a rehearsal June 23 -- one of his last -- was to perform in London in July.

A private memorial service is scheduled for Sunday at Neverland.

Also, a Jackson will written in 2002 has been found, according to family lawyer Londell McMillan.

Planning is under way for a 30-car motorcade carrying Jackson's remains to leave the Los Angeles area at 10 a.m. for Santa Barbara County, California, on Thursday, a source said.

Another state law enforcement source said the California Highway Patrol had not been formally requested to escort the motorcade.

The question of where Jackson will be buried remains unanswered.

Watch the latest twists in the Jackson story »

The singer's hometown of Gary, Indiana, is asking the family to send him there, according to the mayor's spokeswoman.

Gary Mayor Rudy Clay has been in contact with the Jackson family, hoping to make that happen, spokeswoman Lalosa Burns said Tuesday.

Saturday and Sunday night, CNN's Don Lemon takes an in-depth look at Michael Jackson's life and legacy. His childhood, his music, his finances, his influence. Don't miss this CNN Presents special.
This weekend at 8 p.m. ET.

Clay told Chicago radio station WGN that he expects that Jackson's body will, at the least, be taken to Gary for a memorial service he is planning next week.

"I believe that his body will lie in state in Gary, Indiana," Clay said Tuesday. "Now, it may not happen, but I believe it will."

A burial site for the singer could be near a proposed Jackson family museum and a performing arts center, Burns said.

"The mayor had spoken with a contact of the Jackson family and expressed our interest in having that to be a part of the history of this great family," Burns said. "We have not received confirmation on that."

Michael Jackson purchased the Neverland Ranch, north of Santa Barbara, in 1987 and filled it with animals and amusement rides. He ran into financial problems with the property but retained a stake in it at the time of his death June 25.

The ranch is named for the fictional world in J.M. Barrie's "Peter Pan."

The newly discovered will may be one of several, lawyer McMillan said.

"We need a certain amount of time to look at that," he said of whether other wills exist. "I don't personally know, but it's possible."

Until now, the Jackson family has said it has not seen a will for the singer.

Without a legal will, the division of his estate would be decided in court.

The 2002 will surfaced Monday after a Los Angeles judge gave the singer's mother, Katherine Jackson, temporary control of her son's "tangible personal property."

The pop icon's three children -- ages 7, 11 and 12 -- were also placed under the temporary guardianship of Katherine Jackson.

McMillan said he has seen the will but would not disclose its details.

"There is a process called 'probating the will' that will validate any will in due course," he said.

Probate is the legal process to prove whether a will is authentic and valid. The process is used to pass on items in the will from the deceased to the beneficiaries.

The biological mother of Jackson's two oldest children, Debbie Rowe, will be invited to a hearing Monday in which the judge will consider who should have custody of them. She has not publicly indicated whether she will challenge the Jacksons for custody.

CNN's Kara Finnstrom and Don Lemon contributed to this report.