(CNN) -- In death, Michael Jackson is topping charts all over the world again. 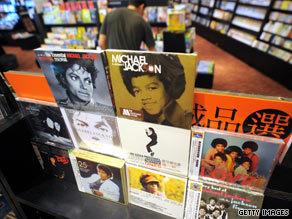 Stores around the globe are seeing a surge in sales for Michael Jackson's music.

Jackson's albums are not eligible for the current Billboard 200 chart, which is for newer albums. But if they were eligible, his record sales would bounce the Black Eyed Peas' current No. 1 album to fourth place, Billboard said.

Jackson's albums "Number Ones," "The Essential Michael Jackson" and "Thriller" all sold more than 100,000 copies last week, close to 20,000 more copies than the Black Eyed Peas' "The E.N.D."

Scores of listeners have downloaded Jackson's music on iTunes as well.

Jackson's songs were on the Top 10 download lists in 21 countries, according to iTunes' Web site early Wednesday.

In the United States and United Kingdom, Jackson's introspective song, "Man in the Mirror," was No. 1 in iTunes downloads. In France and the Netherlands, "Billie Jean" was No. 1. In Sweden, "Smooth Criminal" was in the top spot, while pop fans in Luxembourg preferred "Earth Song."

Of the 22 countries that iTunes tracks, Japan was the only one without a Jackson song in its Top 10.

Jackson had 25 songs on the Top 75 "Hot Digital Songs" chart, according to Billboard. Twenty-one of the songs were solo tunes, while the other four included Jackson's siblings.