LOS ANGELES, California (CNN) -- The rehearsals ended on a high note that night. 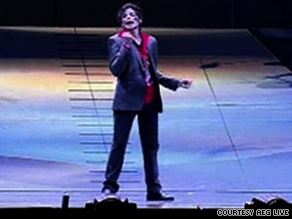 Michael Jackson was energetic and excited. He popped his signature moonwalk and dance spins that gave chills to some of those watching.

As he walked to his car, he put his arm around concert promoter Randy Phillips and -- as Phillips later recounted -- in his soft voice, whispered: "Thank you, I know we're going to get it there together. I know I can do this."

That was late Wednesday night, June 24. A few hours later, Jackson was rushed to a hospital and pronounced dead.

"All I know is that the Michael Jackson that hugged me and said 'goodnight' was a healthy, vibrant human being about to undertake the greatest undertaking of his life," Phillips said Thursday. "And something happened between 12:30 when he left us and the morning when I had to rush to the hospital when I got the first call."

The death of the pop icon shocked the music world, not only because many fans were looking forward to his 50 sold-out shows in London, England, beginning in mid-July, but also because the 50-year-old singer -- while a step slower than in his prime -- was apparently healthy and up to the task of what has been described as a grueling show.

"He was just like a kid in the candy store because he was seeing his vision come alive," said Dorian Holley, the vocal coach for Jackson's band, about the last rehearsal.

"He was just full of jokes, full of life," Holley said. He added that Jackson was due to be back at rehearsals again at 4:30 p.m. on the day of his death.

In that clip, Jackson barreled through the song "They Don't Care About Us." As a guitarist played a riff, he danced next to her and then led eight backup dancers in a choreographed march, reminiscent of his breakthrough music video "Thriller."

The clip -- shot at the Staples Center arena in Los Angeles, California, on June 23 -- ends with a voice off stage saying, "Hold for applause, hold for applause ... fade out."

Phillips said a doctor, hired by the tour's insurance carrier, examined Jackson before AEG proceeded with the rehearsals -- and gave the singer the green light to continue.

"He examined Michael for about five hours at his house and I think they went somewhere for some other tests," Phillips said. "We are obviously not privy to the patient-doctor relationship with that information, but the insurance broker told us that he passed with flying colors."

The production pace in those final weeks was ferocious, some of the attendees said.

Jackson's manager, Frank DiLeo, told a radio interviewer that he discussed tweaking the strenuous two-hour format of the shows.

"We were going to do one of two things," DiLeo told KDKA in Pittsburgh, Pennsylvania, last week. "We were either going to do so much in the beginning, take a half-hour break, then come back and do the second half of the shows. Or we were going to cut it down to 90 minutes."

The exacting rehearsals may have been taking a toll on Jackson, his doctor's lawyer has said.

As authorities await toxicology reports to determine how Jackson died, fans around the world lamented the loss of a great performer whose ability to dazzle seemed intact, if inhibited, in the short video clip.

"He still moves better at 50 than I could at 15," said Stephanie Siek, a graduate student in Frankfurt, Germany. "But he also seems to be holding back in a way he never did in his older videos or other footage I've seen. I think it would have been a great show, but I think that a lot of people would have been disappointed, because he was so iconic in his prime. That's a very, very hard standard to live up to."

This report incorporates information from CNN broadcasts and interviews conducted Thursday for the shows "AC 360" and "The Situation Room with Wolf Blitzer."