(CNN) -- Michael Jackson and Diana Ross shared a bond that he apparently thought would last long after his death. 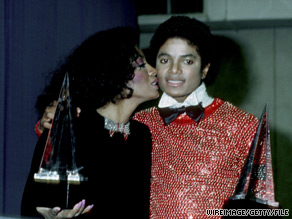 Michael Jackson and Diana Ross at the 1981 American Music Awards.

In his will Jackson wanted Ross -- who took him under her wing and who he called one of his dearest friends -- to take care of his children if his mother, Katherine Jackson, was not alive or was unable to do so.

While the public may have been surprised at Jackson's decision, the two have a long history together.

"I think it's very interesting," Jermaine Jackson, Michael's brother told CNN's Larry King on Thursday. "There's been a long, close relationship with Michael and Diana for many, many years. And I think it's great."

The star of the Supremes met Michael Jackson when he was a 9-year-old sensation after she saw him perform with his family at the Apollo Theater.

She helped catapult The Jackson 5 to stardom when her name was used to release their debut album, "Diana Ross Presents The Jackson 5."

After The Jackson 5's debut album success, the pair appeared together in a variety of sketches, sang at each other's concerts, performed at the Hollywood Palace together, and starred in "The Wiz" together with her as Dorothy to his Scarecrow.

"You see skits from variety shows where they are doing Frank Sinatra songs and Casablanca," Emil Wilbekin, managing editor of Essence.com and a founding member of Vibe magazine under Quincy Jones, told CNN.

"Although she was older than Michael, they had a real connection and that connection, I think, and that friendship really moved throughout his career."

In a 1982 interview for the Ebony Jet Showcase, Jackson said he considered Ross, now 65 years old, to be one of his true personal friends.

"Diana Ross, very dear friend Diana Ross," he said when asked who he considered to be his closest friends. "She is the kind of person, I can tell her anything, the most private of secrets. And she tells me her secrets as well."

That friendship was something of a motherly love on Ross' part and an idolization from Jackson, according to Wilbekin. And the bond they formed could explain why Jackson chose her to care for his kids, if his mother could not, Wilbekin said.

Ross raised five children of her own who grew up to become extremely "normal and successful children of a superstar," Wilbekin said.

"The other thing interesting about Diana and Michael's relationship: They both were a part of groups, they both ended up eclipsing their groups, so they had a shared experience that nobody else could really realize," he said. "I think in that they had a very special bond."

The two also were the subject of gossip regarding the nature of their relationship, fueled by Jackson's song "Dirty Diana." But Jackson said the hit was about groupies.

Jackson also starred in "Diana," produced in 1981 by Diana Ross Productions -- her first TV special not produced by Motown Productions.

In that show, Ross introduced Jackson as "the talent," and "my baby Michael Jackson" before the two sang "Ease on Down the Road," and other songs.

But it was their banter that received most of the attention.

Jackson, in turn, said he always knew Ross would be sexy, and then motioned for the crowd when he asked, "Don't you guys think she's sexy?"

They were so close that when he first underwent plastic surgery, some speculated he was trying to look like his mentor.

Regardless of that speculation, it's clear the two shared a connection deep enough that Jackson trusted her with his children in the event of his death.

"The point that nobody has brought up -- Diana Ross happens to be a phenomenal mother. [Her kids are] kind of balanced, normal celebrity kids. And I think that's the part people aren't really looking at," Wilbekin said.

While some people may have been surprised another Jackson family member didn't follow Katherine Jackson in the will, Wilbekin said he believes that by picking Diana Ross, "he named someone who was super-responsible."

And because Jackson's children, have been growing up in the limelight because of their father, he may have wanted someone familiar with that, Wilbekin said.

"That just shows Michael's foresight, his emotional wisdom and his ultimate love for his family and protecting them," he said. "These are not normal kids, they did not live a normal life, and she totally completely understands that." Ross has not spoken about Jackson's death outside of a statement released on her behalf.

"I can't stop crying, this is too sudden and shocking," Ross says in the statement. "I am unable to imagine this. My heart is hurting. I am in prayer for his kids and the family."

All About Diana Ross • Michael Jackson • The Jackson 5