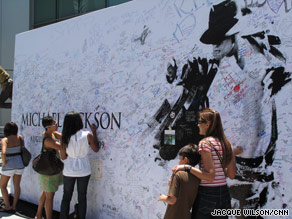 Fans sign a memorial wall for Michael Jackson this week near the Staples Center in Los Angeles, California.

That feat broke a record Jackson set last week when he had eight albums on that chart.

Jackson's albums are not eligible for the Billboard 200 chart, which is for newer albums.

But the "King of Pop" still had five singles on the Top 10 list of digital downloads.

All About Michael Jackson • Billboard.com