(CNN) -- Michael Jackson was the pride of Gary, Indiana, growing up, and on Friday, his hometown paid tribute to the late entertainer with a memorial and celebration in his honor. 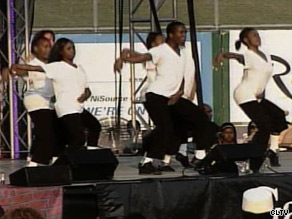 A group pays tribute to Michael Jackson by performing some of his signature moves.

They remembered him as not just the King of Pop or the musician who took Hollywood by storm, but as someone with an unmatched enthusiasm and talent for entertaining even as a little boy growing up in this city of about 100,000 in northwestern Indiana, 30 miles from downtown Chicago, Illinois.

Jackson's first music teacher, Anita Hill, spoke of teaching Jackson to sing "Climb Every Mountain," and remembered him as a "very energetic and wonderful student."

The principal of his middle school remembered how, at Christmastime how Jackson, always jumped up and offered to sing to his class.

Later, when he joined with family members to create the Jackson 5, he performed for kids at his school, the principal said, joking about the bargain that at the time it only cost them 10 cents to see the future pop icon.

Gary Mayor Rudy Clay noted Jackson put the city on the world's map and bid farewell to the star.

"He's going to put on those golden slippers and he's going to dance all over God's heaven," he said.

The tribute at The Steel Yard baseball park in Gary was full of children dancing and singing to Jackson's music, including a performance of "Thriller" complete with the cemetery scene that became so iconic.

Some of the biggest applause of the night came after a video was played of Jackson in Gary talking about his love for his hometown.

"Gary, you will always have a special place in my heart," Jackson said in the video played on the stadium's jumbo screen. "And Gary, you are more than good friend -- you are my family and you always will be."

As a finale, about 700 people holding candles sang "We Are the World," the 1985 song Jackson co-wrote with Lionel Richie to benefit USA for Africa.

Jackson lived in Gary for 11 years before moving to the West Coast after the Jackson 5 recorded their first album in 1969.

His father, Joe Jackson, made a brief appearance after being introduced by the Rev. Jesse Jackson.

After being surrounded by TV crews and photographers, Joe Jackson made his way to the stage, thanked everyone for attending and said it was good to be home.

"This is a pleasure to be back to see so many people here," Joe Jackson said. "It's always good to come back home, you know that."

Fans have flocked to Jackson's boyhood home in the days following his death in Los Angeles, California, on June 25. Autopsy results are pending.