LONDON, England (CNN) -- Hundreds of Michael Jackson fans gathered in London on Monday to pay tribute to the tragic pop star on the night when he was supposed to be opening his 50-night residency in the city. 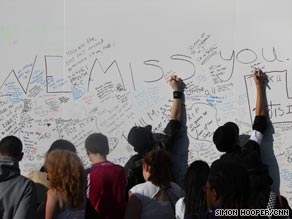 Fans scrawl messages to the star on a wall outside the London venue where he would have been playing.

The O2 arena in southeast London, where Jackson's "This is It" shows were due to be staged, had been the site of an unofficial shrine to the performer since his death last month. On Monday fans laid flowers and memorabilia, wrote messages to the star on a wall and sang Jackson songs.

Many present had bought tickets for the opening night but had decided to come anyway.

"I'm here to pay tribute to the king," said Morganna Bramah, a 29-year-old Web site artist, who had just returned from Los Angeles where she had hoped to attend last week's memorial for Jackson.

"It's one of the most devastating heartbreaking things that has ever happened in my life. I just felt it was my duty to pay my respects who has given so much magic and light and beauty to my life."

Martin Russo, 28, and Enrico Ardito, 34, had travelled from Italy for the tribute. "I grew up with his music and he is my only idol," said Russo. "He had a special bond with his fans. Michael cared truly."

Sophie Bradley, who had flown in from the Middle East, said she had come to say thank you to Jackson.

"I had to come here. He was a father figure and a role model," said the 25-year-old. "It's a chance for fans to talk and share stories and just remember how much he means to us."

Gemma White and Terry Shaw said they were still "in denial" about Jackson's death.

"I feel like I've lost a brother, a lover and a friend," said White. "People say he was only a pop star but to us he wasn't. He was in our hearts. He was a person and the fans got to see that."

"We came down here for Michael," added Shaw. "It was the last thing we could do for him. It had to be done."

Jessica Prater from New York had tickets for Monday's show and had decided she would still come to London even before details of the evening's tribute were announced on Facebook.

"I didn't know so many people across the world were inspired by him," the 28-year-old said. "I've met fans from Finland, Germany, France, the Congo. It's like a family reunion where you meet your long lost relatives. I'm really feeling the love and I know Michael's spirit is definitely here ."

Large whiteboards were erected at the O2 to allow fans to leave messages. After the vigil they'll be moved to opposite the box office so fans can continue to pay their respects.

It's been less than one week since celebrities and die-hard Jackson fans packed the Staples Center in Los Angeles for an emotional farewell to the King of Pop.

Questions still surround the circumstances of his sudden death less than three weeks before the scheduled start of his London shows.

Investigators are still awaiting toxicology reports from the coroner's to determine the exact cause of death.

The decision by fans to stage their own farewell to Michael Jackson at the O2 follows the absence of an official plan to commemorate the singer's life in London.

Concert promoters AEG Worldwide are still unable to confirm reports that a tribute concert will be held at the O2 Arena, potentially on August 29, the date of what would have been Jackson's 51st birthday.

"There have been lots of talks going on about lots of things but nothing that I can confirm," Jones said.

The first official Michael Jackson memorabilia is being offered by Bravado, the global merchandising division of Universal Music Group, and AEG Live which holds merchandising rights associated with the O2 concerts.

Products said to have been personally approved by Jackson before the concert tour are available for pre-order on the Bandstore Web site. Late last week clothing had been shipped to retailer HMV. Play and Amazon were said to have received their consignments over the weekend.

Items are being pushed out to try to beat bootleggers who are already producing Jackson mementos to cash in on demand from fans.

So far only clothing is available, but the range is expected to expand to accessories over the coming weeks.

"There is a high level of demand. It's apparent that fans really want the official merchandise," a spokesman for Universal Music told CNN.

The race to generate income following Jackson's death, from offering commemorative tickets in lieu of refunds to his concerts to the sale of T-shirts and CDs, has rankled some of his fans.

Louise Costello refused a refund for her ticket to the London shows in favor of a commemorative ticket, but says the emphasis should be on the man, rather than the money.

"It's not all about money now. It's about a man whose life has gone. And he touched a lot of people as well, including myself," Costello told CNN.

"He was trying to save the world, and heal the world, things like that. He was a good man and I think they're taking advantage of the fact that he has a lot of people who love him."

Costello is not intending to go to O2 vigil tonight. Instead, she'll make her own pilgrimage to the O2 Arena on July 28, the date she was to see Jackson in concert.

"It's my way of paying my tribute. I'll go there and I'll listen to his music. It's just my way of remembering him," she said.