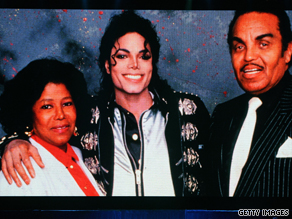 An image of Michael Jackson and his parents was on the big screen during his funeral in Los Angeles.

His mother, Katherine Jackson, has been portrayed by her children as the loving glue that bonded the family together, while her husband, Joe, was the harsh disciplinarian whose iron hand not only shaped one of the most successful musical families in the world, but also elicited enough fear in his superstar son that it sometimes made him ill.

Now the couple of 60 years stands at the center of a custody drama surrounding their grandchildren.

It is the latest installment in the many trials that have tested the Jackson family, not least of which has been the unexpected loss of its most famous member.

"[Katherine's] taking it real hard," Joe Jackson told ABC News about his wife's coping with their son's death. "When you start talking about Michael, she starts crying."

By many accounts, Katherine Jackson, 79, shared a special bond with her second-youngest son.

In a 1993 interview with talk show host Oprah Winfrey, Michael Jackson spoke glowingly of the matriarch.

"My mother's wonderful," he said. "To me, she's perfection."

According to a biography posted by A&E Networks, Katherine Jackson was born Kattie B. Screws in 1930 in Barbour County, Alabama.

Her family reportedly relocated to East Chicago, Indiana, when she was 4, and her name was changed to Katherine Esther Scruse. A childhood bout with polio left her with a permanent limp.

She was a teenager when she met Joe Jackson, an aspiring musician and a boxer whose first marriage dissolved. Katherine said it was love at first sight.

"I just had a feeling that he was going to be my husband," Katherine Jackson said in an interview shot last year by Xonger Global Entertainment Networks for a planned reality show about the family. The video was obtained by ABC News. "The first time I saw him, I fell in love with him."

Together, they raised 10 children in a modest Gary, Indiana, home, while Joe worked as a crane operator, according to the A&E biography.

A devout Jehovah's Witness, Katherine nurtured the children's love of music by singing with them, made her sons' costumes as their father booked local gigs, and served as the family's backbone.

"As best as I could tell from both talking to [Michael] and my observations of the family throughout the years, Katherine was the one that had really unconditional love for Michael and was always there, was always supportive and was always comforting," said journalist and CNN contributor Bryan Monroe, who conducted the last major interview with Michael Jackson. "It was the epitome of a mother's love."

Joe Jackson's relationship with his famous son was a bit more complicated.

Monroe said the hard taskmaster -- who Michael said sometimes held a belt in his hand as he and his brothers rehearsed -- evoked mixed emotions from the singer.

"In my interview with him, [Michael] spoke almost in the same breath of the fear he had of Joseph's sternness ... and at the same time the respect he had for Joseph's work ethics and his teachings," Monroe said. "He said [Joseph] taught him and his brothers an awful lot about discipline and performance."

According to the biography posted by A&E Networks, Joe Jackson was born in Arkansas in 1929 and pursued fame early on, first as a Golden Gloves contender and later as a member of The Falcons, a band he started in the mid-1950s.

When he noticed musical talent in his brood, he formed the Jackson Brothers with his three oldest sons and served as their manager.

The group later became The Jackson 5, with young Michael serving as lead singer, and shot to superstardom.

Psychotherapist Daniel Aferiat, who never treated any Jackson family members, said such an awesome responsibility for a young Michael Jackson could account for the conflicted emotions he expressed in his 1993 interview with Oprah Winfrey. "I just wish I could understand my father," he told her.

"If as a small child Michael Jackson was involved in making business decisions and had to have the burdens in some ways of the financial responsibility for the family, then it can turn around who's the caretaker and who's being taken care of," Aferiat said.

Aferiat said children identify with their parents and learn how to operate in the world based on how they are treated by their parents. The drive for stardom and perfection that Joe Jackson reportedly instilled in his children would have long-lasting effects, Aferiat said.

"People are complicated, and while we all would like to think in more black-and-white terms -- someone's good and someone's bad -- [Michael Jackson] had a very complicated, very difficult and, what I would unequivocally say from what I've heard in the news, a traumatic life," Aferiat said. "If you are a child and you have to give up your childhood, it's not like a pair of shoes that you just get to replace at a later time. You don't get that back."

By many accounts, Katherine Jackson tried to keep her children's lives as normal as possible given their fame, even during their adulthood.

Author Richard Hack co-wrote the 1995 book "Jackson Family Values: Memories of Madness" with Margaret Maldonado, the mother of two of Jermaine Jackson's children. He said Katherine Jackson was "like Mother Earth" to her family.

"She kept everyone pretty well grounded because she didn't buy into all of the publicity and a lot of the glitz," said Hack, a noted biographer who has written 17 books. "Mind you, she did drive around in a Rolls Royce, but she still knew how to make a meal. She would get into the kitchen and bring the family together."

Back then, Hack said, most of the family lived together in the Encino compound. These days, Katherine still resides in California, while her husband reportedly has relocated to Las Vegas, Nevada.

"We're not together all of the time," Katherine Jackson said in footage from the planned reality show. "We stayed together for many, many years."

"But we see each other all the time," she added. "I go to Vegas and he'll come here."

Their living arrangement could become an issue during a custody hearing.

Katherine Jackson was granted temporary guardianship of the children by a judge several days after her son's death.

It is still unknown whether Debbie Rowe, the biological mother of two of the children, will seek custody.

Watch opinions on who should get the kids »

While Katherine is the only parent seeking legal custody of Michael Jackson's children, his father has been quoted by ABC News as saying he believes the two of them are ideally suited to take care of and raise the children "to be strong Jacksons."

Hack, the co-author of "Jackson Family Values," said that in the past Joe Jackson's children viewed him as the "instigator and dictator" who no longer managed their careers but still viewed himself as their voice.

A bit of that behavior was on display last year when the elder Jackson returned to Gary, Indiana, and endorsed a planned family museum.

The Post-Tribune newspaper reported that he didn't believe the city needed to gain his famous children's approval to build the project.

"I'm Joe Jackson," he was quoted as saying. "I don't need them to approve anything."

But when it comes to Michael Jackson's children, the court will have the final say.