Houston makes a comeback with first album in seven years 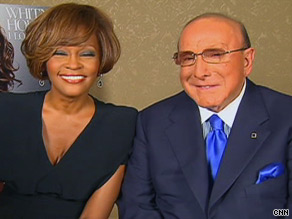 Whitney Houston has credited mentor Clive Davis, right, for her comeback after a seven-year absence.

She smiled and cooed over mentor Clive Davis, calling him "Big Papa" and "Daddy" while the music mogul patted her arm like a proud parent.

The pair was in a side room at the Beverly Hilton Hotel just before the Los Angeles, California, listening session for "I Look to You," Houston's first album in seven years, scheduled to be released Sept. 1.

"I just took a break, which sometimes you have to," said Houston, 45, looking elegant in diamonds and a black Prada dress.

"You have to know when to slow that train down and kind of just sit back and relax for a minute."

Watch an interview with Whitney Houston »

This was definitely the old Whitney -- pre-troubled marriage to Bobby Brown and pre-comment to Diane Sawyer that "crack is wack."

Next door, several hundred industry folks, journalists and friends gathered in a ballroom surrounded by large screens emblazoned with the words, "The Wait is Over."

Jane Fonda, Halle Berry, Magic Johnson, Penny Marshall and Jackie Collins sat in the front while Barry Manilow, Brian McKnight and producer David Foster found seats in the back of the room.

Davis, who has steered Houston's career for more than 25 years, introduced each of the album tracks, mostly slick, upbeat, radio-friendly tunes penned by proven hit makers such as R. Kelly, Alicia Keys, Akon and Johnta Austin.

Heads bobbed while the songs thumped over the loudspeakers, with applause and cheers erupting after each cut. To the amusement of those seated in the audience, even Davis shook his shoulders behind his podium and pumped his fist to the beat from time-to-time.

A ballad on the new disc, "I Didn't Know My Own Strength," alludes to Houston's personal troubles in recent years.

The song, written especially for Houston by Diane Warren, includes the lyrics:

I didn't know my own strength

And I crashed down and I tumbled

But I did not crumble.

Houston deftly steered the focus away from herself, saying she identified with the lyrics because everyone has been through ups and downs in life.

At the end of the session, Houston stepped from the wings to a standing ovation.

"I'm humbled," she said, her hand on her heart. "There's so much love in the room." Then she joked, "Jane Fonda's at my listening party? How cool am I?"

AEG chairman and CEO Randy Phillips also was hanging around, no doubt ready to pounce on a chance to promote her next tour.

"I think it's the biggest hit she's had," Barry Manilow said.