LONDON, England (CNN) -- The organist on the seminal 1960s song "A Whiter Shade of Pale" has won a long-running legal battle for a share in the royalties for the tune. 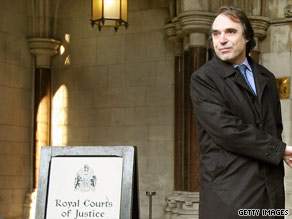 Matthew Fisher, shown here in a 2006 photo, has won a battle over "Whiter Shade of Pale" royalties.

A lower court had ruled in his favor in 2006, granting him co-writing credits and a share of the royalties. Another court partly overturned the ruling in 2008, giving Fisher co-writing credit but no money.

The Court of Appeal said Fisher had waited too long to bring his claim to court. The House of Lords disagreed, said there was no time limit on such claims.

Fisher -- whose organ chords open the anthemic song and carry the psychedelic tune through its final swells -- says on his Web site that the song is the most-played ever on the books of Phonographic Performance Ltd.

Lord David Neuberger of Abbotsbury said the organist had played a key role in the success of the song.

"Fisher's subsequent contribution was significant, and, especially the introductory eight bars, an important factor in the work's success," he wrote in his verdict.

The ruling could be worth a lot of money to him.

BBC television, for example, pays £43.89 ($72.40) per minute in royalties each time it plays the four-minute song, according to PRS for Music, which collects royalties on behalf of music writers, composers and publishers

Writers and composers receive royalties until 70 years after their death in the British system.

All About House of Lords • Music