Michael Jackson's 3 children to get their own lawyer

LOS ANGELES, California (CNN) -- Michael Jackson's three children are getting their own lawyer because the judge overseeing the probate of Jackson's will is concerned their interests might sometimes conflict with their grandmother's. 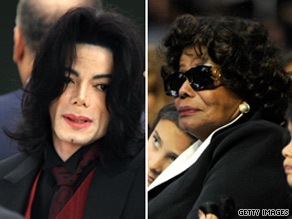 Katherine Jackson has accused the executors of her son Michael's estate of "keeping her in the dark."

Los Angeles County Superior Court Judge Mitchell Beckloff delayed for a week his decision on whether to approve several contracts for the estate to give the children's new lawyer -- whom he will appoint -- time to weigh in on the deals.

Lawyers for the estate and the companies involved warned the judge delaying the deals could cost the estate millions of dollars.

The delayed contracts would provide for Jackson tribute concerts in London, England, starting next July, and an exhibition of Jackson memorabilia that would travel to at least three cities, according to Kathy Jorrie, a lawyer for concert promoter AEG Live.

"The longer we wait, the more time passes, frankly, the less interest there will be on the part of the public to come see it," Jorrie said.

The judge has already approved a contract to allow Columbia Pictures to use video AEG Live shot of Jackson's last rehearsals for a documentary due out this fall. Columbia is a division of Sony.

Sony Pictures issued a news release Monday announcing it would deliver the movie -- "This Is It" -- to theaters starting October 30 "with the full support of The Estate of Michael Jackson."

The film "will be drawn from hundreds of hours of rehearsal and behind-the-scenes footage, captured in high definition with state-of-the-art digital sound as the late singer was preparing for his concert series in London," Sony said. "The film, which will also offer select sequences in 3D, will provide a unique career retrospective and feature interviews with some of Jackson's closest friends and creative collaborators."

Burt Levitch, attorney for Michael Jackson's mother, Katherine, told the judge she was concerned that Jackson's three children might be included in the video, which is now in AEG Live's possession.

AEG attorney Jorrie said that while she has not seen it, she was told no children appear in the video.

Jorrie said the original contract between Jackson and AEG Live for his 50 London shows gave the company a share in the concert video profits. But Levitch said that agreement did not cover rehearsal video.

A delay in the judge's approval of a new contract between the estate and AEG, which includes sharing rehearsal video profits, should not affect the movie deal, according to a lawyer involved in the film agreement.

Court papers filed last week revealed Columbia Pictures would pay a minimum of $60 million for the rights to make the Jackson movie.

Katherine Jackson's lawyers, while endorsing the movie deal, have objected to terms given to AEG, saying it is too generous to the company.

Katherine Jackson's lawyers objected to the estate's agreement to let AEG recover all its expenses from that money and then take 10 percent of the remainder. It also gives the company a perpetual share of the profits from the video rights.

AEG Live's lawyer said the company has already made many concessions to the estate and could not make more.

Howard Weitzman, a lawyer for the men who now control the estate, told the judge the contracts were "aggressively negotiated and reflect the exhaustion of all parties on give and take, and greatly benefit the estate."

"I don't believe there is room for more negotiation," he said.

The judge previously has said he may approve the contracts even over Katherine Jackson's objection.

Jermaine Jackson, Michael Jackson's older brother, told CNN's Larry King last week that he likes the deals, which he said could bring in nearly $100 million into the estate.

Katherine Jackson and Jackson's three children are the main beneficiaries of the estate, which is controlled by Jackson's former lawyer, John Branca, and longtime Jackson friend and music executive John McClain.

Branca and McClain were named in Jackson's will as executors. Katherine Jackson is considering a challenge of their control of the estate.

The decision to name a 'guardian ad litem,' or lawyer appointed by the court, for the children came at the end of Monday's hearing.