LOS ANGELES, California (CNN) -- In her first television interview since Mel Gibson went public with their relationship in April, his girlfriend, Oksana Grigorieva, made it clear to CNN: "I'd like to be known for my music." 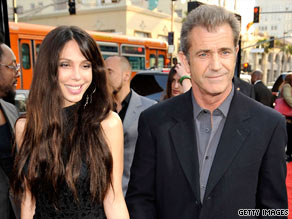 Oksana Grigorieva and Mel Gibson are expecting a child this year.

Still, the 39-year-old singer was willing to talk about her beau and her pregnancy, as well as her new album, "Beautiful Heartache."

"Beautiful Heartache" was released to iTunes on July 23 by Icon Distribution, Gibson's company, which up until now has handled only soundtracks for his movies.

"He's an incredible artist," Grigorieva said. "A visionary. He enabled me to produce this album, for my music to live."

"They're like dramatic miniature films -- a whirlpool of different, exciting, bright images. That's quite rare," she said.

The music videos and music are available on her Web site, www.oksana.fm.

Grigorieva has a background in music. She said she was classically trained as a pianist in her native Russia, and both her parents are musicians. In 2006, a song she penned called "Un Dia Llegara" was recorded by Josh Groban for his album "Awake."

Though she describes her album as being about "different facets of love," she cautions that listeners shouldn't overthink the lyrics. "This album is not autobiographical -- maybe only partially so. It's not a diary."

Gibson, 53, and his wife of nearly 30 years, Robyn, filed for divorce in April. The two have seven children.

Grigorieva and Gibson were first photographed together on the set of his movie "Edge of Darkness," according to People magazine. Grigorieva is pregnant with Gibson's child and is to give birth this year.

She said the couple has opted not to learn the sex of the child. It will be her second child, after Alexander, her 12-year-old son with actor Timothy Dalton.

"I'm already buying things in gender-neutral colors. It's very cute," she chuckled. Alexander, she added, is excited about having a sibling. "He's like a little man, protecting me. He's looking forward to it very much."

Grigorieva says she and Gibson have no immediate plans for marriage. "We don't know yet. We haven't really talked about it," she admitted.

She acknowledged that her relationship with Gibson has given her a unique opportunity to present her skills.

"If you think about it, every talent needs a serious push and help from somebody who is stronger, because it's pretty much impossible for anybody to succeed in this industry. So I've become very lucky, and I'm very grateful," she said. "You don't control the situations or the people you meet. I did not plan this. I'm just doing what I've always been doing. It's not like I've changed my goals at all."

In the meantime, Grigorieva is adapting to life in the public eye.

"It hasn't been too bad, actually. There was a period of time where it was a little bit difficult, but now it's much better," she said.

Before embarking on limited press for the new album, Gibson did offer a few words of advice, she added: "Just be myself and speak the truth. What I most like to talk about is my music and 'Beautiful Heartache.' And that's pretty much it."

All About Mel Gibson