(CNN) -- The newly remastered Beatles box sets are a treat for a casual fan and a dream come true for die-hards. 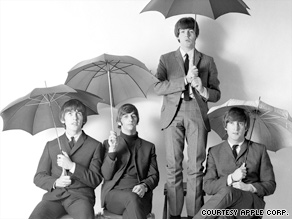 The new box sets are expected to introduce the Beatles to yet another younger generation.

The mono set may be revelatory for some, but even the box of stereo albums -- the best-known versions and the primary sales focus -- is a step up from the 22-year-old original CD releases.

Many other audible delights emerge to the surface more often than they did in the prehistoric days of vinyl and cassette because of the remastering.

Harrison's surprisingly cheerful-sounding sitar that mimics Lennon's melody in "Norwegian Wood (This Bird Has Flown)," from 1965's "Rubber Soul," is much crisper. Explore a timeline of the Beatles over the decades

The remastering work likewise subtly expands the band's sound from its earlier days, a time when overdubs and studio tricks were kept to a minimum. iReport: Are you a Beatlemaniac?

Listening to the band's debut album, 1963's "Please Please Me" (mostly recorded in a one-day session), it all but feels like being in the musty studio watching them perform these songs.

Lennon's sore-throated screaming (literally and figuratively) on the album's finale, "Twist and Shout," has never sounded more sandpapery -- and that's meant as a compliment. Read about the engineers who worked on the remastering

Other full-throttle rockers, like the whoop-it-up Motown cover "Money (That's What I Want)" (from 1963's "With the Beatles") and Sir Paul's one-take vocal explosion on Little Richard's "Long Tall Sally" (1964), also shake the walls.

If you want to know what it was like to see the Beatles perform in the Cavern Club during their pre-fame days, play these songs at a very high volume. Just make sure your neighbors don't mind.

But it's perhaps on 1966's "Revolver," once crowned the greatest recording of all time by Rolling Stone magazine, where the magical mystery work of Abbey Road recording engineer Guy Massey and the many others involved is most apparent.

The horns on McCartney's sassy-brassy "Got to Get You Into My Life" sound like explosions, while his too-tender-to-touch ballad, "Here, There and Everywhere," peacefully floats through the air. George Harrison's three compositions (especially "I Want to Tell You" and the biting opening track, "Taxman") are all more impressive thanks to the new paint job.

The chiming guitars on "And Your Bird Can Sing" bring Lennon's lucid lyrics a Technicolor shine. "Revolver's" closing track, John's "Tomorrow Never Knows," full of tape loops and wizardry from the mixing board, is a trip. (No surprise, given its drug-assisted origins.)

The material of the Beatles will continue to impress as long as human beings need to listen to music. These new box sets, along with the Rock Band video game, will certainly introduce the group's catalog to yet another younger generation.

The new listeners will likely jump in instinctively: I took my 5-year-old son to see McCartney in concert last month, and when "Drive My Car" opened the show, he was air-guitaring along with his grown-up peers.

Watch a report on the Beatles in the 21st century »

For fans who have been bombarded with these songs countless times, there's something new as well.

A splendid time is guaranteed for all.