LOS ANGELES, California (CNN) -- Michael Jackson feared his father so much he would faint or vomit sometimes when his father entered the room -- even when the pop singer was an adult, according to a book written by a former Jackson confidant. 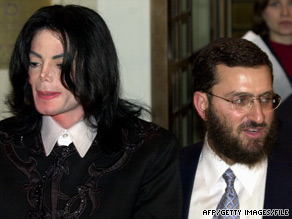 Rabbi Shmuley Boteach, Michael Jackson's confidant, sat down with the King of Pop and taped 30 hours of interviews.

"The Michael Jackson Tapes" includes Jackson talking about his fear of growing old, his relationship with children, his friendships with Madonna and Brooke Shields, and his remarkable shyness around people that made his surround himself with mannequins.

Jackson opened up to Rabbi Shmuley Boteach for 30 hours of interviews, which were taped nine years ago and intended for a book Jackson wanted written, Boteach said.

"He was trying to reclaim his life," Boteach said Friday in an NBC "Today Show" interview.

Jackson, who died on June 25 of what the coroner found to be a deadly combination of drugs, "lost the will to live, I think he was just going through the motions of life toward the end," Boteach told NBC.

CNN has not independently confirmed Jackson's quotes in the book, but Boteach was known to be a spiritual adviser to Jackson for several years beginning about 1999.

Ken Sunshine, spokesman for the family, including the singer's father, Joe, issued a statement on the book. "We are not going to dignify this with a comment," he said.

The book was not published during Jackson's lifetime because of the pop star's child molestation trial, which ended with an acquittal in 2005, the author said. The author said Jackson's arrest ended any interest in a book about him.

"I don't want to grow old," Jackson is quoted as saying in one interview with Boteach.

"When the body breaks down and you start to wrinkle, I think it's so bad," Jackson said.

Jackson talked to Boteach about why he was drawn to children, especially those who were sick.

Helping children enjoy their childhood is his mission, Jackson said.

"I feel that this is something really, really in my heart that I am supposed to do, and I feel so loved by giving my love, and I know that's what they need," he said.

Jackson said that while adults "appreciate me artistically as a singer and a songwriter and a dancer and a performer," children "just want to have some fun and to give love and have love and they just want to be loved and held."

Boteach, in an interview about two years before Jackson's November 2003 arrest, asked Jackson about the young cancer patient who would later become his main accuser.

Boteach asked Jackson whether by speaking to people like the boy "part of the pain goes away for them."

"Absolutely," Jackson said. "Because every time I talk to him he is in better spirits. When I spoke to him last night he said, 'I need you. When are you coming home?' I said, 'I don't know.' He said, 'I need you, Michael.' Then he calls me 'Dad.'"

Michael Jackson's taped statements about his father's treatment of him as a child echoed what he has said previously.

"He was rough, the way he would beat you, you know, was hard," Jackson said. "He would make you strip nude first. He would oil you down. It would be a whole ritual. He would oil you down so when the flip of an ironing cord hit you, you know, and, it was just like me dying, and you had whips all over your face, your back, everywhere. And I always hear my mother like, 'No, Joe, you're gonna kill him. You're gonna kill him. No.' And I would just give up, like there was nothing I could do. And I hated him for it. Hated him."

Joe Jackson has denied physically abusing his son. "Now, Michael was never beaten by me, I've never beaten at all," he told CNN's Larry King in July. He did suggest he used spankings for disciplining his children.

Another Michael Jackson quote from the book alleged emotional abuse by Joe Jackson:

"God bless my father because he did some wonderful things and he was brilliant, he was a genius, but one day he said, 'If you guys ever stop singing I will drop you like a hot potato.' It hurt me. You would think he would think, 'These kids have a heart and feelings.' Wouldn't he think that would hurt us? If I said something like that to Prince and Paris, that would hurt. You don't say something like that to children and I never forgot it. It affects my relationship with him today."

Jackson told Boteach he was still "scared of my father to this day."

"My father walked in the room -- and God knows I am telling the truth -- I have fainted in his presence many times. I have fainted once to be honest. I have thrown up in his presence because when he comes in the room and this aura comes and my stomach starts hurting and I know I am in trouble. He is so different now. Time and age has changed him and he sees his grandchildren and he wants to be a better father. It is almost like the ship has sailed its course, and it is so hard for me to accept this other guy that is not the guy I was raised with. I just wished he had learned that earlier."

In the excerpts provided to CNN by the book's publisher, there were no quotes from Jackson discussing his drug use, but Boteach does write about what he saw during the several years he was Jackson's spiritual adviser, starting in 1999.

While Boteach said he never personally saw Jackson use drugs, he did suspect it. "In the time that I knew him, he always seemed intent on me having a positive view of him and nothing untoward was ever done in my presence," he wrote.

While their close relationship ended around the time of the molestation charges, Boteach said Jackson's parents reached out to him later for help in convincing him to enter drug rehab.

"Perhaps I could inspire Michael to make that decision, and his parents thought I could at least help," Boteach said. "But I knew they were wrong. Michael had long since ceased taking my counsel. He found my advice too demanding. I was an irritant and was treated as such."

He said he told Joe and Katherine Jackson that "it was imperative for them to save their son's life by becoming available parents in his greatest hour of need."

Sometimes those closest to Jackson were not people -- but mannequins, the book said. Jackson said he was so shy at times he surrounded himself with dummies.

"Because I felt I needed people, someone, and I didn't have," he said. "I was too shy to be around real people."

Boteach, in the NBC interview Friday, said it made his skin crawl to hear that.

"His celebrity had created a degree of isolation where he could not simply feel comfortable around other people," Boteach said. "He thought that everybody wanted something from him. He felt that he was trapped in this cocoon of fame and that there was some exploitative relationship with virtually everyone that he met."

The book does offer insight into Jackson's dating of celebrity women, including actress Brooke Shields.

"That was one of the loves of my life," Jackson said. "I just wished she loved me as much as I loved her, you know."

He told Boteach one problem he had with women was their jealousy of his fame.

"Madonna was very fond of Michael Jackson (as she clearly expressed in her tribute to him at the VMA's) and I doubt anything in the book will change her mind," Rosenberg said.