Mason Jennings gets 'dark and raw' in 'Blood of Man'

LOS ANGELES, California (CNN) -- Mason Jennings is free of drugs or alcohol. Has been for some time now. But danger still lurks in his music. 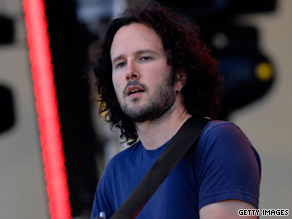 Effortless melody, dexterous wordplay, tight compositions -- they come easy for Jennings, whom Rolling Stone recently dubbed "one of the best songwriters you've never heard of." But his new album, "Blood of Man" (Brushfire), goes deeper than his previous work, which presented a more affable side of the Honolulu-born, Minneapolis-based singer-songwriter.

At a recent show in Los Angeles, Jennings told the crowd that he had to tell his mother about a couple of songs on "Blood of Man." "There might be some painful memories in there," he warned.

His mother responded, "Well, I'll be writing a song called 'My Son Stole My Car and Got Stoned and Drunk.' "

"Blood of Man" is raw and personal, Jennings allowed in an interview.

"I got to a place where I made music that moved me," he said. "When I play with that kind of openness ... I know I can get free."

"I think it has to do with wanting transcendence," he said at another point. "Everybody is looking for a feeling of release, and my release comes through my music."

CNN sat down with Mason Jennings in a Los Angeles recording studio. The following is an edited version of the interview.

CNN: This record is getting the best reviews of your career. Reaction?

Mason Jennings: It's surprising. [For] this one, I didn't even think about other people. What would I like to do? If no one is going to hear this, what would it sound like? So I was just recording tons of songs in the winter by myself, and I ended up putting out what I had done. I thought there would be no reviews or people would just ignore it. So it's great to have this kind of reaction [to the album].

CNN: The title "Blood of Man" can mean many things ...

Jennings: I was actually a little embarrassed by it. Kind of intense and pretty dark, but in the end, there was no other option. To me, it's about humanness -- dark and light -- instinctual humanness. There's just life blood coming through it.

CNN: You mentioned darkness. On the album, we have "black wind blowing" and "lonely roads" and "suicide halls." Are you speaking from personal experience?

Jennings: [It was] letting myself feel anger, desire, fear ... all those human things inside you. Trusting that it's OK to put them out there. Trusting more about what resonates with me rather than trying to steer the songs to safer waters.

CNN: Were there parts of yourself that you hadn't really mined to this point?

Jennings: Yes. The song "Pittsburgh" draws from experiences I had growing up that triggered a lot of different things. It's a rough period for everybody, but I had a lot of different experiences that were kind of ... difficult. I started writing about those, and it started feeling more like a diary or my own expression [as opposed to] some of my other stuff where I tend to be more "in character."

CNN: How did your newfound practice of meditation affect "Blood of Man"?

Jennings: I would think that if you go that inward that even more demons would come up, but it was the opposite. I started doing a lot of yoga, pretty intensely, right when I started recording these songs. So I have a feeling that it was a big part of getting into my body -- getting physical and connecting with my spirit and allowing me to get free. It was a big part of this record, strangely, because [the record] is so dark and raw, but the whole time I [knew] I could handle it.

CNN: The song "Blood of Man" seems like a centerpiece.

Jennings: When I was doing these recordings, I was sending them to a couple of producers to see what they thought of the ideas. Most of the time they were asking me how I recorded this or that and how I got [certain sounds]. I thought "Maybe this is OK just how it is." I didn't have that one final song that tied it all together, and I was so excited about the idea that I was going to release everything [as is] and that song just came to me and really hit me hard. It's one of my favorite songs. That song feels like something I've been trying to do for years. It captures the feeling I had the whole time I was writing this album.

CNN: I could see where a producer would take these songs and add strings, make it gloss, but it works the way it is.

Jennings: A lot of people want to clean up my sound. They want to take the rough edges off, and whenever I've tried that -- to hear my voice in that context ... it doesn't sound good. It sounds out of place, like having a barn animal walk into a fancy room.

CNN: It can't be calculated.

Jennings: Got have to that tape rolling. And the other thing is [to] make sure you stay inspired by life. Keep that sense of wonder.