'Lucy in the Sky with Diamonds' dies

LONDON, England (CNN) -- The childhood friend of John Lennon's son who inspired the Beatles' psychedelic masterpiece "Lucy in the Sky with Diamonds" has died aged 46 from the chronic disease Lupus. 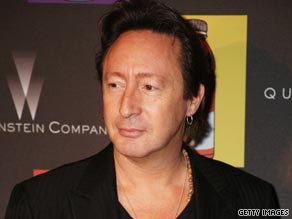 Julian Lennon showed his father a drawing he had done of Lucy Vodden. The rest is music history...

Lucy Vodden was a classmate of Julian Lennon, who came home from school one day carrying a drawing of his 4-year-old classmate. "That's Lucy in the sky with diamonds," he told his father.

Lennon seized on the image and embellished it in a song along with "newspaper taxis" and a "girl with kaleidoscope eyes."

The BBC later banned the track, which appeared on the 1967 album "Sgt. Pepper's Lonely Hearts Club Band," for its supposed drug reference with the words of the song spelling out LSD.

Lennon always claimed though that the title was suggested by Julian, not from any wish to spell out LSD, the chemical name for the drug, acid, in code.

Julian Lennon lost touch with Vodden when he left Heath House nursery school, near his parents' home in Surrey following their divorce in 1968. But they were reunited in recent years when he heard she was suffering from the immune system disease and he lent his support to her.

Vodden's death was announced on Monday by St. Thomas Lupus Trust in London, where she had been treated for more than five years.

"Julian and (his mother) Cynthia are shocked and saddened by the loss of Lucy and their thoughts are with her husband and family today and always," the trust said on its Web site.

Angie Davidson, Campaign Director of the St. Thomas' Lupus Trust said "everyone at the Louise Coote Lupus Unit was dreadfully shocked by the death of Lucy, she was a great supporter of ours and a real fighter, it's so sad that she has finally lost the battle she fought so bravely for so long."

Vodden, who was a housewife from Surbiton, southwest of London, cherished her link to the Beatles, but did not especially like the song she inspired.

"I don't relate to the song, to that type of song," she told The Associated Press in June, according to the Web site, PopEater.

"As a teenager, I made the mistake of telling a couple of friends at school that I was the Lucy in the song and they said, 'No, it's not you, my parents said it's about drugs.' And I didn't know what LSD was at the time, so I just kept it quiet, to myself."