Alice in Chains returns after death of singer

LOS ANGELES, California (CNN) -- The four members of Alice in Chains are always amazed every time someone says, "Wow, you guys sound like Alice in Chains!" 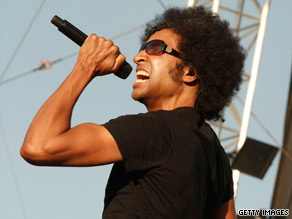 New member William DuVall belts out a tune for Alice in Chains.

The pioneering grunge band has just released "Black Gives Way to Blue" -- its first studio album since singer Layne Staley died from a heroin and cocaine overdose in 2002 -- and fans are understandably playing a game of compare and contrast.

With his scruffy blond goatee and pain-laced baritone, Staley may have been the face and voice of Alice in Chains, but in many ways, guitarist Jerry Cantrell has been the unsung heart of it, writing much of the band's catalogue and singing half of the droning harmonies that would become group's trademark.

These days, when Cantrell shares the mic with new vocalist William DuVall, the blend is uncannily familiar. DuVall's voice can sound eerily like Staley's, but instead of being borne of desperation, it suggests a certain soulfulness that becomes more apparent on live acoustic tracks.

Watch DuVall blend his talents with the band »

We caught up with DuVall and Cantrell, along with bassist Mike Inez and drummer Sean Kinney, as they shot the video for their current single, "Check My Brain," on a Hollywood soundstage. The song is currently No. 1 on both Billboard's Rock Chart and Alternative Chart.

CNN: Will, you're stepping into some big shoes there with this Alice in Chains legacy.

Jerry Cantrell: He's got his own big shoes.

CNN: But there had to have been some soul-searching when you took this job.

DuVall: It's not as though it happened out of the blue There's a back story to this process that predates the 2006 touring that sort of began this whole thing.

I've known Jerry almost 10 years now. We've admired one another's work for a long time. There's a friendship here. It's actually not too unlike what probably happened to them when they first started the band back in the late '80s. Friendships develop, and then you start creating music together.

So all this stuff developed very naturally. There was never a point where we drew a line and said, "Now here is where the resurrection begins!" So there wasn't any baggage attached to it.

CNN: People like a good comeback story -- but at the same time, you have some fans who are saying, "How dare you go on without Layne."

Cantrell: Well, you can listen to those old records and we'll make some new ones. They're there!

We're lucky to have a pretty strong core audience that has kind of been with us through thick and thin, and that's cool. We're not really for everybody, and that's fine with us. It's nice to have an opinion about it, but all that stuff happened to us for real. It's really our life. So for us to come through that type of adversity, and for us to stand up, I think is a pretty heroic thing and I'm really proud of all of us.

Mike Inez: Ultimately, we're our own hardest, harshest critics, you know. If the four guys here didn't feel good about this, we just wouldn't do it.

CNN: You have the blessing of Layne's family, correct?

Cantrell: Well, they are family, and they've always been supportive through it, and we love them dearly. Layne and his family are always a part of our family, and always will be. It's all good.

CNN: What has changed in terms of the sound?

Cantrell: Well, we added a member, so Will's going to bring himself and his talents to the band. But the musical core of the band is intact, and a lot of the writing part of it is intact.

Sean Kinney: Yeah, shocking isn't it, that we sound like ourselves! That blows my mind. People are always doing it -- "Well, you sound like yourself." I don't know what we're supposed to sound like. I mean, Three Dog Night? Would have been cool with me, but I'll just stick with our thing.

CNN: Jerry, the first single, "Check My Brain," comes from your experience moving to Los Angeles from Seattle.

Cantrell: Yeah, it's kind of a funny thing. Being from Seattle, it's pretty easy to make fun of the Southern California lifestyle, or maybe it's easy for a lot of people to take a shot at it. But this is where I ended up, and still can't believe I'm living here. But I'm digging it! No need to rock the boat, man.

CNN: That could be a big hit for somebody, but Alice in Chains?

Inez: What band was that?

DuVall: Hues Corporation [Everyone laughs]. But this place does a mind job on everybody -- the warped sensibility that this place has, and the dream factory element. A lot of dreams have been scattered and broken on the ground, but that experience happens everywhere, too.

Kinney: I still live in Seattle, but I've been down here so much lately that I noticed I've been getting out of cars with no panties, which is weird for me. But that's what happens when you're in L.A., I guess.