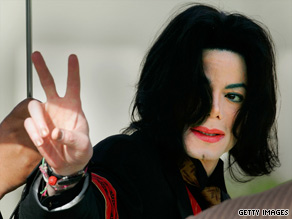 But the theme and the lyrics of the song turned out to be about a better world for humanity.

"He wrote what he told me he thought was his most powerful song ever, but it didn't end up for animals," Jane Goodall said in a CNN interview Thursday night.

Goodall spoke exclusively to CNN in a Panamanian rain forest where she is exploring a partnership on behalf of Roots & Shoots, her global youth education program.

The interview comes as a new version of the song, first released on Jackson's 1991 "Dangerous" album, is being recorded by a collection of artists for release in late October.

Goodall became friends with Jackson about 20 years ago when he invited her to his Neverland Ranch, where "he talked about his dreams for the place to have animals running, looking free like they would in the wild. ... It was just a very charming day, very low key, nobody else was there," she said.

Goodall, famous for her 50 years of groundbreaking research on chimpanzees in Africa, said Jackson invited her because "he loved what I did."

"He loved chimpanzees," she said. "He loved to watch them feeding. He liked their faces. They made him smile."

Years later, she met Jackson's chimp, Bubbles, and has visited him at his retirement refuge in Florida, she said.

"He's extremely handsome," she said. "He's a beautiful, beautiful chimp. So, he was rescued in time from this life of being inappropriately dressed up and carted around like a little symbol."

Goodall, whose life has been spent understanding chimpanzees, said she found Jackson to be "a sad person."

"In some ways, he was like a child, and a very sweet and gentle child, and he wanted me to tell him many, many stories," she said. "Stories about the chimpanzees, the forests, animals, anything. He told me he liked the way I told stories."

Goodall, who travels the world to promote protection of endangered chimps, said she had hoped Jackson would help get her message out.

"I said to him, 'You know, Michael, if you want to help, you could do a concert and give us a percentage. Or much better, write a song,' " she said.

Jackson asked her for tapes of animals in distress because "he wanted to be angry and cry" as he wrote the song, which became "Heal the World," she said.

The original CD cover notes credited Goodall for inspiring the song, she said.

But, she added, the Jane Goodall Institute never saw any money from the song.

Jackson later created the "Heal the World Foundation," which he funded with a series of concerts. The group delivered millions of dollars of relief to children around the world.

All About Michael Jackson • Jane Goodall