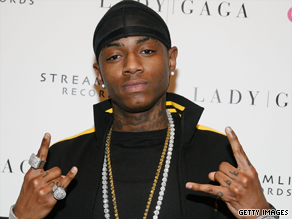 Rapper Soulja Boy was arrested in Georgia after allegedly running from police.

The 19-year-old singer was among a large group that had gathered at a home in Stockbridge, 20 miles south of Atlanta, said Henry County, Georgia, police Capt. Jason Bolton.

Bolton said officers responded to a complaint about a group of youths milling around the house, which appeared to be abandoned. When police arrived, they saw about 40 people. Half of them ran away, including Way, Bolton said.

The ones who remained told officers they were at the home to film a video. Way was arrested when he returned to the house to get his car, Bolton said. He said the house was dark inside and looked abandoned.

"He just ran from the police, and then he decided to come back," according to Bolton.

The second man who returned for his vehicle was arrested after police found eight $100 counterfeit bills inside, according to the officer.

Way broke into the music scene two years ago with his hit "Crank That (Soulja Boy)." The rapper also describes himself as a producer and entrepreneur.

All About Soulja Boy • Hip-Hop and Rap • Celebrity News • Music