(CNN) -- The Michael Jackson song "This Is It," released Monday, was co-written and recorded in 1983 with singer-songwriter Paul Anka, Anka and the Jackson estate confirmed Monday afternoon. 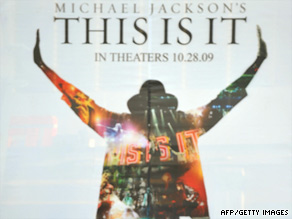 Interest has been running high in "This Is It" -- the song, the two-disc album and the movie.

Jackson's estate and Sony Music Entertainment did not realize this history when they picked the song out of boxes of tapes in their archives, leading to a big surprise Monday when Anka called them, Anka said.

Jackson, who became busy with the success of his "Thriller" album, never finished the duet recording that was intended for Anka's "Walk a Fine Line" album, Anka said.

Latin hip-hop singer Safire recorded and released the song in 1990 -- under the title "I Never Heard," Anka said.

"Somebody just innocently found this tape and did not know somebody recorded it with him," Anka said.

Estate spokesman James Bates acknowledged to CNN that the "song was written with the legendary Paul Anka."

"We picked the song because the lyrics were appropriate given the name Michael gave his tour," Bates said.

It was just a coincidence that the song's first words were the same as Jackson's last planned tour, Anka said.

Monday's release of the lilting love song was part of the promotion for the Sony movie "Michael Jackson's This Is It," which comes out in two weeks.

Anka said it was "an honest mistake" that the estate's special administrators quickly resolved Monday.

"They realized the mistake," Anka said "They apologized and they've given me rightfully what I own. It's 50-50, right down the middle."

Rob Stringer, chairman of Sony's Columbia/Epic Label Group, was quoted in The New York Times on Sunday as saying he did not know the origins of the song.

Anka, who is heard playing piano on the song, said producers did a beautiful job of completing it.

Backing vocals from Jackson's brothers and orchestration were added to the spare voice and piano track recorded 26 years ago in Anka's studio.

The original version, with just Jackson and Anka, will be included in the two-disc soundtrack, along with the orchestral version, Sony said.

The orchestral version will play at the close of the film, which will feature Jackson's career highlights and last rehearsals, Sony said.

The CD will be released on October 27, coincidental with the debut of the movie, Sony said.

"Disc one features the original album masters of some of Michael's biggest hits such as 'Billie Jean,' 'Smooth Criminal,' 'Human Nature,' and 'Thriller' arranged in the same sequence as they appear in the film," Sony said.

The second disc includes "early demo versions" of Jackson classics "She's Out Of My Life," "Wanna Be Startin' Somethin'" and "Beat It," Sony said.

The just-released song got widespread airplay on radio shows across the United States Monday, according to Nielsen BDS, a company that tracks music airplay. It the 21st most-played song on the 1,300 stations monitored by Nielsen, with at least 680 "spins" by mid-afternoon, the company said.