(CNN) -- The best way to get tongues wagging is to say nothing at all, and it's a skill Rihanna has down to a science. 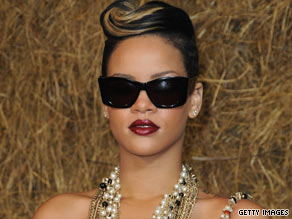 Rihanna apparently revealed the release date for her new album over Twitter.

The Barbadian songstress arrived a bit late to the Twitter party when she -- or her people -- created a "rihanna" tag yesterday and sent out a single, sparse tweet: "The Wait Is Ova. Nov. 23 09."

Whether that's the name of a new single, the beginning of a viral marketing campaign -- or both -- is unknown, but a representative for Rihanna told Entertainment Weekly that though the date "looks accurate" for her album release, "The Wait Is Ova" is not the album title.

The only other object fans can mine for clues about the singer's upcoming release is the logo, a metallic nail fashioned into a crudely shaped "R" that has swarmed the Internet.

The new record would be her fourth since her debut at 17. In the four years since, she's evolved from an unknown, breezy pop singer to a sonically and fashionably more distinct persona. One can only expect that her latest effort would continue to show that growth.

Yet there are extra layers of anticipation surrounding the unnamed work: Not only is this Rihanna's follow-up to "Good Girl Gone Bad," the album that made her an international superstar, it's also the first time she is piping up as a solo artist since the infamous fight with her ex-boyfriend, Chris Brown, in February.

Those who've worked with the star on the record have said to expect something with more ferocity. "Expect an edgier, almost angrier Rihanna on this one," Ne-Yo told E! Online. "Rihanna says some things on this album that you've never heard her say before."

But, said Mariel Concepcion, associate editor for Billboard.com, that statement shouldn't be taken too literally.

"She has changed a bit, but I think she's simply grown. Fans are expecting her to reveal some details, but I think she's going to subliminally let it be known that 'Yes, [Chris] hurt me, but I'm moving forward with life.' This issue was such a serious issue, it calls for more than putting out an angry song about it."

Tracey Johnson, who said she's been a fan of the singer since the beginning, has high expectations for the upcoming release, but not because she expects to hear about Rihanna's personal life.

"[Some fans] feel like it would be good for her to represent abused women in some sort of way and say something, but in my perspective, she doesn't owe us anything," Johnson said. "She's always been pretty private about the relationship, and she's never opened a lot in her music anyway."

If Rihanna maintains her silence, Johnson said, it will be "kind of a hit back at the critics who said she disappeared after not becoming the spokesperson for domestic abuse. She's saying this is what you should be paying attention to: I'm a fashion icon, and I make great music."

Johnson, co-founder and editor of celebrity Web site NeonLimelight.com, has paid close attention to Rihanna's reported studio time over the past few months, but said he didn't expect to see the album appear so soon -- and with a tweet, no less.

"I'm definitely expecting more for this album," she said. "Rihanna has a platform now that she didn't have before 'Good Girl Gone Bad.' She's gone a step forward with each album, and I think it's going to be a little more of what we heard on 'Good Girl Gone Bad,' but to the next level."

That's a prediction that Concepcion agrees with, considering that the people who have been pulled in on this album resemble the team who worked on "Good Girl": Justin Timberlake, Ne-Yo and Tricky Stewart, who was behind the single "Umbrella" that launched Rihanna to a new level of pop stardom.

Devin Lazerine, editor of Rap-Up.com, said Stewart isn't trying to top the success of "Umbrella," but rather create a sound that would live up to its success.

"Just from hearing 'Run This Town' we can see the direction she's heading in," Lazerine said. "It's going to be darker and more edgy. She was actually going to put that song on this album, and then Jay-Z heard it and they traded songs."

"She's all about the music and the sound -- I think we're going to get something that embodies her fashion sense," he said. "I don't think there's going to be much about the Chris Brown situation; I don't even think her fans expect that. They just want something that pushes the boundaries."

Rihanna's former other half, Chris Brown, has been busying in the studio as well. The singer, who was sentenced to five years' probation and more than 1,400 hours of community service in August, released the single "I Can Transform Ya" with Swizz Beatz and Lil Wayne a few weeks ago, but it's not the only one circulating the Internet.

"So Cold," a ballad with lyrics that sound suspiciously autobiographical, was leaked onto the Internet yesterday, as Brown's Twitter page confirms. Nonetheless, the artist does plan to keep it on the upcoming album "Graffiti," which has an undetermined release date.

All About Rihanna • Pop and Rock Music • Chris Brown (Singer)