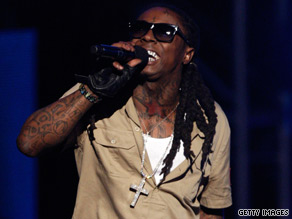 Lil Wayne is expected to receive a one-year jail sentence for his guilty plea.

He is expected to receive a one-year jail sentence, the office said. The Grammy Award-winning artist, whose real name is Dwayne Carter, is due for sentencing in February.

His trial had been scheduled to begin in January.

When he was indicted in February 2008, Carter pleaded not guilty to a charge of criminal possession of a weapon, the district attorney's office said. His guilty plea Thursday was to a reduced charge.

He was arrested in July 2007. Police officers said Carter and another man were smoking marijuana on a street, and the officers found a .40-caliber pistol in Carter's possession.

All About Hip-Hop and Rap • Crime