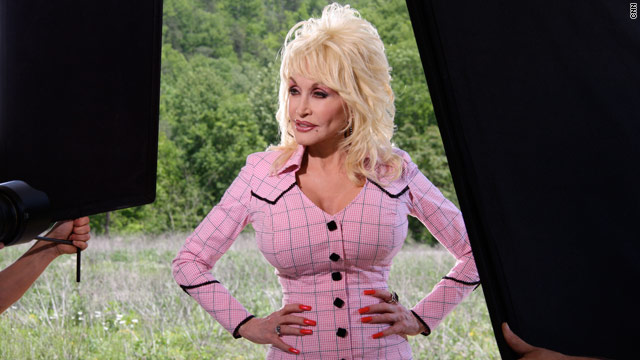 London, England (CNN) -- "Never wear your makeup to bed," implore the beauty editors. But Dolly Parton was never one for following conventional advice on looking good.

She sets her own standards, from her striking sculptured hair to the bright lashings of eye shadow caked on a face that she has admitted in the past owes a lot to modern surgery.

"I know I'm a bit over-exaggerated; I wear too much makeup, too much hair," the singer-songwriter and theme park co-owner told CNN's Revealed.

And it's not just for the stage or public appearances. The truth, Dolly told CNN, is that when she's in California or New York "where anything could happen" she goes to bed with her makeup on.

"I think I'm not going to wash my face until morning, and then I'll clean it off and I'll put it on in case I have to get up in the middle of the night," she said.

"If I go out in public, people expect me to look a certain way and if you say 'There's Dolly' or whoever it may be, you expect to see them in the way that you see them, the way you know them." Watch Dolly Parton on a photo shoot for a magazine cover

Dolly's dedication to her image has helped push the small town country girl up the ranks from gifted singer and songwriter to international icon complete with her own Dolly-branded theme park.

Parton introduced herself to the country music charts in 1967, at the age of 21, with her debut album "Hello, I'm Dolly." A successful partnership with Porter Wagoner, the host of the television show of the same name, put her on the national stage.

Forty albums have followed, including a succession of No. 1 hits, awards and high-profile performances on television and film.

"She is so full of life and spirit and she loves playing jokes on people and she likes to keep you on your toes, but musically I have never met anyone who can walk out on stage and consistently sing as in tune and proper and right as Dolly Parton does," her sometime duet partner Kenny Rogers told CNN.

She recently wrote the score for "9 to 5: The Musical," a stage version of the 1980 comedy "Nine to Five," a film she not only starred in but for which she also composed the award-winning title song.

The musical was nominated for four Tony Awards this year, but failed to win any. After a disappointing four-month run, the curtains are set to close on September 6. Perennially upbeat, Parton later said she "couldn't have asked for a better experience on my first Broadway show."

In 1986, Parton's megastar status was confirmed with the opening of her own theme park "Dollywood." In 2001, a water park, "Dollywood's Splash Country," opened next door.

Both are in Pigeon Forge, a small town at the foothills of Tennessee's Great Smoky Mountains National Park where Parton famously grew up as one of 12 children crammed into a three-room cabin.

Dolly is without doubt the town's most successful daughter. Every year, for the past 24 years, locals have lined the streets to wave and cheer as Parton rides atop the leading float in the Dolly Parton Annual Parade of Pigeon Forge.

This year was no different. Her float was transformed into a snowy scene, complete with fir trees and a log cabin from which she waved at well-wishers, many wearing T-shirts emblazoned with her photo. See photos of the 2009 Dolly Parade

One man even had her image etched onto his back in a large tattoo. "It's just the magic she brings you and that heart-warming feeling. The music just blows you away, blows my mind away, I just love it," he told CNN.

The locals' love of Dolly is hardly surprising. She's a one-woman PR machine for Pigeon Forge, and through "Dollywood" is Sevier County's biggest employer. You don't want to upset your boss.

Many members of the extended Parton family are on the payroll at "Dollywood," and entertain the park's 2.5 million visitors when the main attraction can't be there.

One of them is Bill Owens, her uncle, who is credited with taking the young Dolly Parton out of the Great Smoky Mountains and into the big smoke.

"I took Dolly to Nashville when she was very young," Owens told CNN. "I've worked with her since she was 10 years old, when I heard her singing. We'd take the wagon back and forth to the radio stations and the minute she graduated we was (sic) gone the same day to Nashville."

It would be easy to say she never looked back, but that isn't true; she's always looking back.

"I always thought when I was young, if I ever made it -- and I hoped I would, and dreamed that I would -- I thought I would love to be able to come home and do something special to honor my family," she said. "You always want your people to be proud of what you have accomplished."

Parton told CNN she's accomplished everything that she set out to do, and she has no plans to ever step out of the spotlight.

"I don't want to retire, I hope to just fall over one day in the middle of a song and that's how I want to go -- with a smile on my face hopefully."

And presumably also with big hair and a lot of makeup.