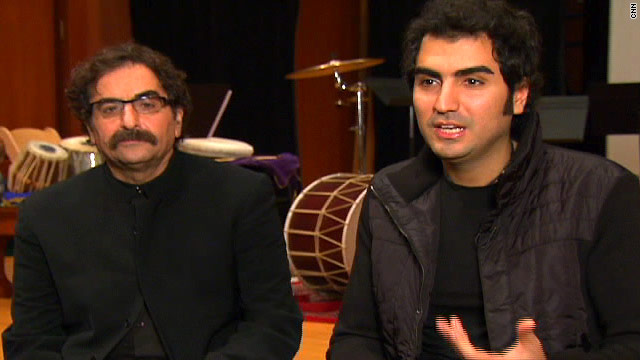 Shahrem Nazeri, left, and his son Hafez Nazeri hope their music shows Americans another side of Iranian culture.
STORY HIGHLIGHTS

New York (CNN) -- Diplomacy hasn't worked. Sanctions have achieved little. Relations between Iran and the United States are, at best, chilly. So why not try music?

On Saturday night, for the first time, Iranians were the headline performers at New York City's famed Carnegie Hall. A father and son from Iran led American musicians in a hybrid session of traditional Iranian and classical Western music.

Thirty-year-old Hafez Nazeri told CNN he was pleased to present "another dimension of Iran and Iranian culture to the Western people."

Nazeri, who now lives in the United States, said, "We hear mostly about the other side -- bloodshed, chaos -- and I wanted to be able to present the reality of our culture, which is about peace and love and unity."

Nearly 3,000 people, many of them Persians, flocked to Carnegie Hall for the concert. One patron said, "The message was completely obvious: Love all the way. Peace!"

Video: Iranians play Carnegie Hall
[Our] music ... is not just for Iranians, it's for people from all over the world.
--Hafez Nazeri, Iranian musician
RELATED TOPICS

The Nazeris said it was an honor to be onstage at the historic music center. The younger Nazeri said his music might be able to bridge cultural divides between Iran and the United States.

His father, Shahrem, still lives in Iran. Speaking in Farsi, the man known as the Iranian Pavarotti talked about the demonstrations that followed June's disputed Iranian presidential election.

The Nazeris are two of the few Iranian musicians allowed to freely travel and perform in Iran. Western-style popular music is banned in Iran.

With just a few musicians, they form a rare group, blending Persian traditional themes with Western classical style. It's very simple in presentation: a cello, percussion and an improvised setar -- a Persian instrument like a lute -- played by Hafez Nazeri.

The Nazeris' music is based on the 13th-century Persian poet and philosopher Rumi.

"The idea of the music is to bring unity and to be able to create a music that is not just for Iranians, it's for people from all over the world," the younger Nazeri said.

Rachel Cooper, director of cultural programs and performing arts at the Asia Society, said, "You're seeing the Iranian culture and the Western culture in something that's a kind of hybrid, that I think represents the times that we live in."

"We've been going through this time period where we've been thinking about the Berlin Wall coming down, and throughout that period of the Cold War, cultural relations were always a really important component. So I think that cultural relations -- music in particular -- are a really important part of how we know each other as human beings," Cooper said.

The Nazeris have performed in cities across the United States in recent years.