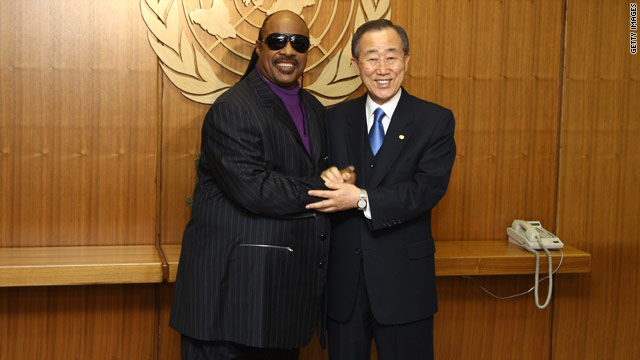 Wonder -- blind since birth -- will promote U.N. ideals and activities with an emphasis on championing for people with disabilities, U.N. Secretary-General Ban Ki-moon said.

When his installation announcement was briefly interrupted by a fire alarm in the U.N. Secretariat Building in New York on Thursday, Wonder broke the tension with a joke. "I'm trying to figure out a new melody," he said.

It was a false alarm caused by smoke from nearby construction, a U.N. spokesman said.

Wonder "has consistently used his voice and special relationship with the public to create a better and more inclusive world, to defend civil and human rights and to improve the lives of those less fortunate," the secretary-general said.

A U.N. statement cited Wonder's activism in the 1980s against apartheid in South Africa and for a national holiday in the United States honoring Martin Luther King Jr.

Wonder -- born 59 years ago in Saginaw, Michigan -- has been a star since childhood, when he was known as "Little Stevie Wonder."

In addition to his long performance career singing and playing piano, Wonder has written a long list of hit songs, including "For Once in My Life," "Superstition," "Higher Ground" and "Sir Duke."