Oprah's gurus talk about her courage, struggle with weight

(CNN) -- CNN's Larry King spoke Tuesday evening with a team of fitness and health experts about Oprah Winfrey's latest bout with weight gain, and they reveal how she's fighting back. 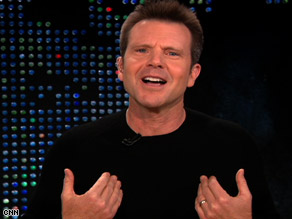 Personal trainer Bob Greene, Dr. Mehmet Oz and spiritual adviser Michael Bernard Beckwith tell Larry what Oprah is doing to help herself, and what viewers can learn from her struggles.

Below is a partial transcript of the show, edited for brevity and clarity:

As any fan knows, she's packed on 40 unwanted pounds in recent years. She talked about it on yesterday's "Oprah" show. Now, Bob Greene, you consult on her on weight. What happened?

Bob Greene, Oprah's personal trainer: Most people have some weight that they want to lose. And Oprah is no different.

Most people think it's simply a matter of what you're eating or you're eating too much or you hate exercise and you lack the discipline to follow a plan long-term. If you're working too hard, if you're in relationships that need help or you're not satisfied with, it's always about the rest of your life. And for each person, it's different.

And Oprah puts in 16 hour days. That's a very busy life. And that's not an excuse. It can unravel for her. The key is finding what in your life is causing you to misuse food.

King: Bob, one would think with that kind of busy life, you would lose weight.

Greene: Not true. She'll be the first to tell you that if she's stressed, if she's bored, if something is bothering her or she's happy, food is a coping mechanism. And it was that way since childhood. And that's a very difficult thing to break.

King: Someone told me today that it's not how much you eat, it's what you eat. True?

Greene: It's actually a little bit of both. Twenty-seven years I've been doing this, and I've never found anyone where the problem was simply they love food or they hate exercise. It's always intertwined with their life. And they use food as a coping mechanism.

King: All right, Bob, is this an embarrassment for you to have her this overweight, frankly?

Greene: Not at all. You know what, I think -- first off, kudos to Oprah. She comes out and in a very public and candid way explained that she's struggling with this.

People are struggling with this. And the irony of it is that people quickly forget that Oprah lost a total of 90 pounds and, for the most part, kept most of it off. She kept it off for close to 15 years.

Now she put only 40 of that back and has since gotten back on the wagon.

King: Bob, why does she and so many others go up and down?

Greene: Well, the irony is, if you follow a good plan -- obviously I have a plan out there that I think is fantastic and I would recommend people go on it.

But if you follow the plan, it works, for the most part. There are a lot of good ways to go about losing weight. You've got to be more active and you've got to eat in moderation. That's not rocket science.

The interesting thing -- and it's different for everybody -- is what is it about the rest of your life that causes you to run to food?

King: We're joined, as well, in New York by Dr. Mehmet Oz. He's a "New York Times" best-selling author. His latest book is "You Being Beautiful: The Owner's Manual to Inner and Outer Beauty." It's co-authored with Dr. Michael Roizen.

Dr. Mehmet Oz, Oprah's medical adviser: She had Vitamin D deficiency. Why would that be shocking for a darker-skinned person who spends a lot of time in Chicago? If you're watching this show right now, if you live in a Northern state, you are probably Vitamin D deficient. And then what does that cause?

It causes autoimmune problems. So for her, it takes your thyroid gland -- which is like your thermostat in your house and it shifts it off kilter, so you can't quite get the right temperature in your body.

And those things tend to lead to guess what -- changes in the metabolism and weight gain.

King: What do you think of what Bob Greene does?

Watch Larry reflect on his show about Oprah's weight gain »

Oz: I think Bob is right on target. You know, the same way you look as a fever as not the cause of your illness, but a symptom of an underlying infection, to me, weight gain -- especially when it's in the belly area -- is a reflection of stress.

King: We're joined now here in Los Angeles by Michael Bernard Beckwith. Michael is the founder of the Agape International Spiritual Center. He is the spiritual adviser to Oprah. He will be a guest on Oprah's Best Life week tomorrow.

How is Oprah fitting spirituality into all of this?

Michael Bernard Beckwith, Oprah's spiritual adviser: First of all, let me say that I just commend her for having the courage to go public with her feelings, her anger and her desire to make a great shift in her life. Spirituality fits in this in that as she indicated to herself that, in terms of eating, she is looking for something to fulfill something within her.

King: Michael, the average person can't have a spiritual adviser, a personal doctor and a personal trainer. So with the same problem, what do they do?

Beckwith: The average person needs to stop and have a little self-love and appreciation. They need to take a little time every day and get in tune with those emotions and those feelings, and ask them what are they trying to say to them.

King: Last year, Bob Greene told Oprah he thought she might be suffering from depression. Here's what she says, or how she reacted to that? Watch.

Greene: I really thought maybe she is depressed. I brought that up to her.

King: In that regard, we have an e-mail question from Kim in Los Angeles, saying "I am afraid my best friend is gaining weight because of depression. Every time I try to bring the topic up, she becomes very defensive. I think she is in denial. What can I do to help her?"

You take that, Bob?

Greene: Yes, again, the key is to look at your entire life. And I like exercises, emotional exercises, that identify first the areas of your life that are going well. And praise yourself for that. And then look at those areas that aren't going well and break them down. How are your relationships, romantic relationships, your friendships? Where are the areas that need change?

And then make a plan to change them. And then, the most important thing is to find gratification in those small steps towards changing those.

Oz: Bob mentioned depression. One of the things about depression is that it is a wake-up call. We do some of our most creative work when we are depressed. We have to get to the root issues behind which we are often hiding.

King: What happened to her, Michael?

Beckwith: The ego got in there. She said I conquered it. We are not here to conquer weight. We are here to activate our potential. What she was talking about was a personal accomplishment, rather than a way of living.

What I loved about one of Michael's answers when he was talking about Oprah conquering something, he hit that right on the head. You don't conquer this. You have to wake up each day and renew your commitments to yourself. This is a daily thing.

King: Oprah says that as her weight went up, her self-esteem went down. Her lowest point, she said, may have been a show she did with Tina Turner and Cher in Las Vegas. Watch.

Winfrey: Tina said, Oprah come on out here. I thought, God help me now. How can I put myself between them? Can I put half of my body behind Cher's? Cher's body is half of my body. How can I hide myself here on this stage, and not have to be up here? It is just awful. I felt awful.

King: That had to be awful tough, Michael.

Beckwith: Yes, she was doing an extremely good acting job, because she is saying she hated being out there, but she was smiling.

King: She knows how she looks.

Beckwith: She knows how she looks. She was twice the size of the other individual. Again, this is a moment of motivation for her. What we're saying here is that it's a way of life and that you have to approach this by doing something every single day for the rest of your life, and then you celebrate the triumphs along the way.

King: Let's say she goes down to 128 pounds. How do we know she doesn't go up again?

Greene: First off, 128 isn't realistic for her. If you know anything about her, she's actually very strong, very muscular. And her ideal weight is somewhere a little higher. Let's say she reaches her ideal weight. And I guess the question is, what's to stop her from going -- there's only one thing that will stop her, and that's Oprah. Every day she needs to wake up and commit to the things that add vitality and health to her life. It's all in her hands.

King: Bob Greene, do you think Oprah will make it?

Greene: Well, obviously, I've been with her. She's very encouraged. It's so funny, I get that asked that question a lot. I've been working with her for 14 years. And never on an interview, and I won't start tonight, will I say the words she beat it. You don't beat this. It's, again, this daily thing, where you are recommitting to the life that you're meant to live every day of your life.