(CNN) -- The Tennis Channel has canceled plans to broadcast a tournament in Dubai because an Israeli player was banned. 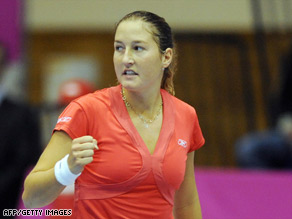 Shahar Peer, the 45th-ranked women's player according to the World Tennis Association, qualified to compete in this week's Barclays Dubai Tennis Championships but was denied a visa by the United Arab Emirates. Dubai is one of the seven emirates of the UAE.

The cable network had planned to air parts of the tournament this weekend.

"Tennis Channel recognizes that this exclusion has been made by state authorities and neither the tour nor tournament directors themselves," said a statement posted on the channel's Web site Wednesday. "However we also honor the role and proud tradition that tennis has always played as a driving force for inclusion both on and off the courts.

"Preventing an otherwise qualified athlete from competing on the basis of anything other than merit has no place in tennis or any other sport, and has the unfortunate result of undermining the credibility of the very nature of competition itself."

The announcement comes the same day The Wall Street Journal Europe announced it is dropping its sponsorship of the tournament.

The paper also said it plans to cancel a special tennis-themed advertising section scheduled for Monday and its backing of a men's tournament in Dubai scheduled for next week.

After days of international criticism, including the WTA saying it would review whether the UAE should be allowed to host future tournaments, the event's organizers said Peer was barred from the tournament for her own protection, apparently alluding to Israel's recent military offensive in Gaza.

"We do not wish to politicize sports, but we have to be sensitive to recent events in the region and not alienate or put at risk the players and the many tennis fans of different nationalities that we have here," organizers said in a written statement.

The statement cited anti-Israel protests before one of Peer's matches at a recent tournament in New Zealand.

But this is not the first time the UAE has barred Israeli tennis players. Last year, an Israeli men's doubles team was denied entry. The emirate also cited security concerns then.

In a statement posted on the Tennis Channel's site, Peer thanked the cable channel for its decision.

"I was very moved and excited to hear about your decision not to broadcast the Dubai tournament following their denial to allow me to participate in the event," she wrote. "You at Tennis Channel were the first ones to add action to the words and this is leading the way to other organizations as well.

"All I want is to play tennis and do well. I believe you are helping me to do exactly this."