Stewart seen as winner in showdown with Cramer

(CNN) -- By most accounts, the showdown was pretty brutal. 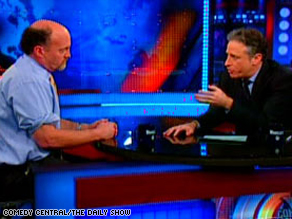 Many declared Jon Stewart, right, the victor in his face-to-face with Jim Cramer on "The Daily Show."

Stewart, known for his zany, satirical take on the news, was serious as he took Cramer's network to task for what Stewart viewed as their "cheerleading" of corporations at the heart of the nation's current economic crisis.

And despite the title of his financial show, Cramer came off as less mad and more apologetic.

"If it was a prize fight, they would have stopped it," said Howard Kurtz, the "Washington Post" media critic and host of CNN's "Reliable Sources." "I was stunned that Jim Cramer kind of did a rope-a-dope strategy and didn't really defend himself against Jon Stewart's assault."

Kurtz is very familiar with the style of both men.

He has appeared on "The Daily Show" and is the author of "The Fortune Tellers: Inside Wall Street's Game of Money, Media and Manipulation," in which Cramer is featured.

Kurtz said Stewart "made clear at the outset that he wasn't going for laughs" and displayed very much the same passion for holding the media accountable as he did when he appeared on, and denounced, CNN's "Crossfire." Watch the debate on "Reliable Sources"

"When I went on [Stewart's] show last year, he was so wound up in ripping the media that he went on for another 10 minutes, knowing full well that we were out of time," Kurtz said. "Stewart, as funny as he can be, is a very trenchant media critic who cares passionately about this stuff, and we saw that Thursday night."

iReporter David Seaman of New York said he was surprised at the vigor with which Stewart "attacked Cramer's credibility." Check out David's iReport

The public wants answers as to how the country got into such financial distress, and viewers really want someone to answer for the mess, Seaman said.

"People want to see a lot of the financial gurus on a shish kabob, being skewered," Seaman said. "It's really important to hold people accountable, and as we saw last night, Jon Stewart is a bit of a wild card, so if you aren't living up to expectations, he may call you out."

David Brancaccio, host and senior editor of "Now on PBS," commended Cramer for his bravery in going on the show, though he said he was surprised that the brilliant founder of TheStreet.com seemed ill-prepared for Stewart's very thoughtful questioning.

Brancaccio, the former host of American Public Media's "Marketplace" radio program, echoed the comments of many in that he found the exchange visibly uncomfortable for the usually showman-like Cramer.

"You have the comedian as journalist, and you have the financial journalist as clown, in that on his show, Cramer's goofing around and plays the clown," Brancaccio said. "What a role reversal."

Brancaccio thinks the episode may serve as a cautionary tale for those in the media who don't do their due diligence. White House approves of smackdown

"I don't think any financial journalist wants to be in Cramer's position," Brancaccio said. "I think [journalists] may redouble their efforts to be dispassionate reporters asking the tough questions."

Steve Krakauer is associate editor of TVNewser.com, one of the leading blogs about the television news industry, and said comments at his site have been mixed about the show.

Although some thought it was one of the best interviews they had ever seen, others found Stewart arrogant and said his outrage might have been a bit staged.

Krakauer said the question now is where Cramer -- who has said he plans to make some changes to his show -- goes from here.

Krakauer said he doubts that there will be a complete overhaul of "Mad Money."

"I can't see things drastically changing," Krakauer said. " 'Mad Money' is one of the most successful shows on CNBC. Despite what has been written about Jim Cramer, the things he's gotten incorrect and the calls he has made, he's still popular and one of the most entertaining for people who are interested in that type of financial news."

If anything, Cramer's appearance on "The Daily Show" may have just stoked the flames. Comedy Central's Web site played it up with clips from the show that it called "an historic moment in basic cable."

The topic is such a hot one that Kurtz will lead "Reliable Sources" with it Sunday, with journalist Tucker Carlson, radio show host Stephanie Miller and "Baltimore Sun" television critic David Zurawik as guests.

"Beyond the entertainment value, and we are not above that, this is a really important moment for holding financial journalists accountable," Kurtz said. "It may have taken Jon Stewart to blow the whistle on some of the hype and shortsightedness at America's top business news channel, but those failings were repeated throughout the business press, which stumbled badly in reporting on what turned into a huge financial meltdown."