LOS ANGELES, California (CNN) -- Farrah Fawcett has been hospitalized in the latest stage of her battle against cancer, a producer working with the actress said Monday. 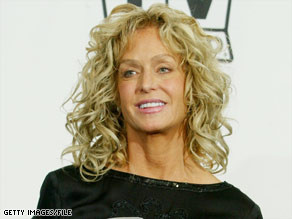 He added that Fawcett "is surrounded by family and friends." She "has a real iron will" and is "a fighter," he said.

Nevius has been working with the 62-year-old on a documentary about her fight with cancer.

Earlier, he told People magazine that Fawcett had checked into "a Los Angeles hospital."

Early in 2007, Fawcett said she was told her cancer had gone into remission. Her official Web site has posts from February, 2007 celebrating the news.

But the cancer returned later that year.

Fawcett was a model best known for bit parts and commercials, and as "Six Million Dollar Man" actor Lee Majors' wife, when she shot a best-selling pinup poster in early 1976 at the behest of a Cleveland, Ohio, company called Pro Arts.

Photographer Bruce McBroom placed Fawcett -- then known as Farrah Fawcett-Majors -- in the Indian blanket-draped front seat of his 1937 Chevy and snapped away. The poster, with Fawcett's million-dollar smile front and center and right nipple obvious through the fabric of her red bathing suit, became a sensation.

Soon after the photo shoot, Fawcett was asked to join the cast of a new Aaron Spelling TV show, "Charlie's Angels," about a trio of female detectives who work for a mysterious man named Charlie. Fawcett, who played Jill Munroe, was the last to be cast -- co-star Kate Jackson was the known name at the time -- but, thanks to her poster, Fawcett became the series' breakout star.

The highly rated TV series kicked off what came to be known as "jiggle TV," series full of young actresses who appeared in bikinis at the drop of a hat. "Denunciations of 'massage parlor television' and 'voyeurism' only brought more viewers to the screen, to see what the controversy was about," wrote Tim Brooks and Earle Marsh in their exhaustive reference, "The Complete Directory to Prime Time Network and Cable TV Shows."

"Charlie's Angels" turned out to be a huge hit, and shows ranging from the sitcom "Three's Company" to the drama "Baywatch" owe the show a debt.

Fawcett didn't stay with "Angels" long. At the end of the first season, unhappy with her contract, she left the show, replaced by Cheryl Ladd.

Fawcett's career stagnated for a time after "Charlie's Angels," as she appeared in a handful of forgettable films and divorced Majors. But her career received a major boost with her starring role in "The Burning Bed," a 1984 made-for-television movie co-starring Paul LeMat. In the film, Fawcett played an abused wife who sets fire to her husband's bed as he lies sleeping. Fawcett received an Emmy nomination for her performance.

Around that time, Fawcett became romantically involved with actor Ryan O'Neal, with whom she had a son, Redmond, in 1985. Redmond O'Neal was arrested Sunday morning for narcotics possession.

In recent years, Fawcett has appeared sporadically in the public eye. She posed nude for Playboy in 1995. In 1997, she appeared on "The Late Show with David Letterman," an interview that became notorious for Fawcett's apparent incoherence. She later said she was just having fun with Letterman.

She reunited with her "Charlie's Angels" co-stars, Jackson and Jaclyn Smith, for an awards-show appearance in 2006.

Fawcett has been making a documentary, "A Wing and a Prayer," for NBC about her cancer battle.

"She is an icon, and you don't become an icon by being weak," Nevius said Monday. "All you have to do is look back at her 30-year-plus career to see that she is not somebody that has ever stepped down or backed down from a challenge of any kind. "

All About Farrah Fawcett • Cancer