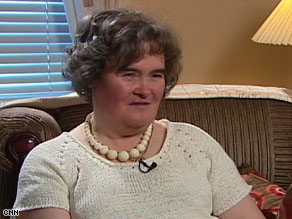 Susan Boyle says despite snickers when she began singing, she knew she just had to win over those cynics.

"It hasn't changed me one little bit," Boyle told CNN in an interview at her home. "I keep my feet firmly planted on the ground, because you have to."

The 47-year-old shocked and inspired the audience, judges and Web watchers after she powered through "I Dreamed a Dream" from the musical "Les Miserables" on the TV show "Britain's Got Talent."

A clip of Boyle's performance had more than 11 million views on YouTube by Thursday, and the world's media have beaten a path to her door in Blackburn, West Lothian, Scotland.

Her performance seems to have given "I Dreamed a Dream," a new life of its own. The song shot up to 39 on the iTunes chart of top downloaded songs by Thursday night.

While she said she's the same person -- the shy girl who has never been kissed -- it's clear that Boyle's life is already changing.

Sitting in her home, insisting her life remains the same normal life, with her same basic routine, one can't help but notice the piles of fan mail and cards from well-wishers.

And then comes a knock on the door. Throngs of fans shrieking at her doorstep are begging for her autograph. Watch Boyle sing for "AC360°"

Boyle says the experience has humbled her, but she's also still in shock and overwhelmed by her overnight stardom.

"The way everyone seems to have embraced me," Boyle responds, when asked what has been the most surprising change since her appearance. "The way they seem to have apparently fallen in love with me."

The singer acknowledged she noticed the initial snickers when she got on stage for her performance. But she didn't let it get to her. If nothing else, it fueled her motivation.

"I just thought mentally I'll show them, so I did," she said. "If people are cynical, you try and win them 'round and it worked. It must have been a miracle, but it worked."

Boyle still has a long way to go, though -- having just won through to the second round after judge Simon Cowell described her first performance as "extraordinary."

If she can make her way through the show's final rounds, she will get to sing for Queen Elizabeth II at the Royal Variety Show.

Boyle has promised to be on her best behavior if she wins the right to sing for her.

"Whatever comes my way, I am ready. It would be lovely to sing for the queen. There would be less of the carry on from me, and more of the singing.

Watch Boyle tell CNN 'it must have been a miracle' »

"She is a very regal lady, very nice, so I would be nice too, and just get up there and give it a bit of wellie [try]," Boyle told the show's Web site.

Boyle said she was trying to take her newfound fame in her stride.

"It's a challenge. Life is a challenge sometimes but this is different. And I like to test myself.

"If it all gets too much and they lock me up, I want a great big strait-jacket with spots on it. A pink one... and a big zip on the back so I can escape."

Cowell is reportedly already trying to piece together a record deal for Boyle, an unemployed charity worker, who lives with her cat, Pebbles. But Boyle says she's not focusing on any of that - yet. She's spending her time focusing on the current competition.

But for Boyle's fans, the album cannot come quick enough.

CNN has been inundated with hundreds of messages of support for Boyle.

Simone said: "I've been so depressed all day but hearing this woman sing and reading her story gave me a pick-me-up... I look forward to hearing more of her and I hope to buy her CD as soon as it hits the shelves."

"She brought tears to my eyes and a lump in my throat. I hope Simon does get her a record contract...I'll buy her CD. Never judge a book by it's cover. Susan Boyle, you go, girl!"

"I wish Susan the very best in her new life and hopefully someone has put her under contract. Thank you for such a beautiful song."

"I have just heard you sing for the first time -- thanks to CNN -- and I must tell you this: You are a fabulous talent, simply amazing to me that no one took advantage of your voice and passion up until now. I am a happily married man, but if I were not, and if I was in the audience, I can guarantee you that I would ask for a kiss, and if you were gracious enough to indulge me, well that would have been one of the great highlights of my life. Looking forward to the first of many albums."